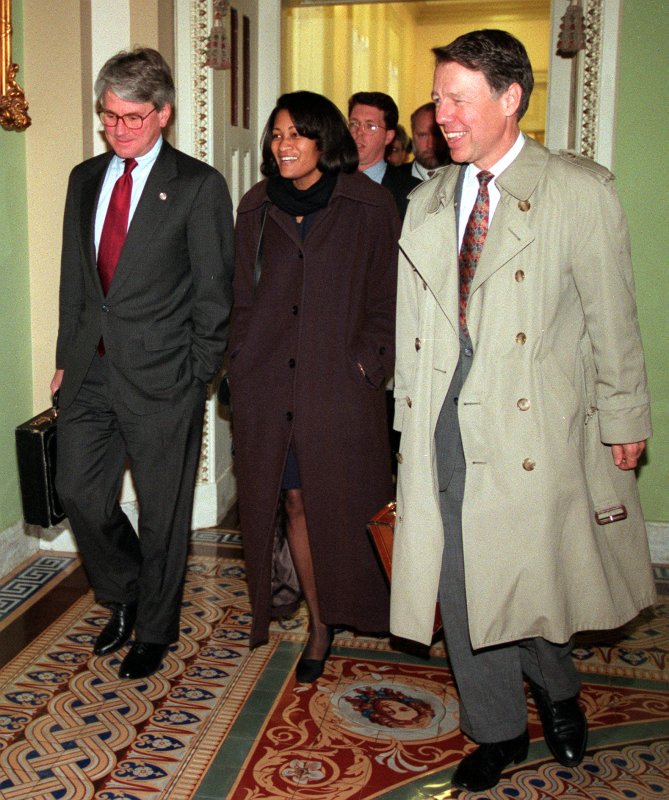 WASHINGTON, Jan. 14 -- The following are brief profiles of the seven White House and private lawyers who will serve as President Clinton's defense team in the Senate impeachment trial.

David Kendall, 54, the president's private attorney, is a longtime personal friend and Yale Law School classmate of both the president and first lady Hillary Rodham Clinton.

The father of three is a devout Quaker and former Rhodes Scholar who was arrested repeatedly while participating in the civil rights battles of the 1960s.

He is currently a partner in the law firm of Williams & Connolly, with specialties in libel defense, criminal defense and general civil defense.

Seligman helped defend Oliver North on charges of selling arms to Nicaraguan rebels during the Reagan presidency, and defended Hollywood filmmaker Constantin Costa-Gavros when he was sued by U.S. diplomats for libel over his controversial film 'Missing.'

She counts Caroline Kennedy Schlossberg among her closest friends.

Gregory Craig has been White House special counsel since 1998. He is a Yale Law School graduate who served previously as a director for policy planning at the State Department; a partner with Williams & Connolly; and a foreign policy adviser to Sen. Edward Kennedy, D-Mass.

He helped defend John Hinckley after he shot President Reagan.

Lanny Breuer has been White House special counsel since 1997. He served previously as a partner with Covington & Burling; an assistant district attorney for Manhattan; and an instructor at The American School in Switzerland.

His legal successes are highlighted by a lawsuit against the Clinton administration involving a gay Marine who violated Pentagon rules.

Bruce Lindsey has served as an assistant to the president and deputy White House counsel since 1994. He is a close personal friend of Clinton from their days together in Arkansas and remains one of the president's most faithful companions.

He practiced law in Little Rock; served David Pryor both as senator and governor; and served as national campaign director for Clinton's 1992 presidential victory.

Cheryl Mills has been deputy White House counsel since 1997. She is a graduate of the Stanford University Law School, and in her private and public legal career has specialized in matters of civil rights and education.

U.S. News // 17 minutes ago
Capitol police arrest Va. man with fake ID, gun as officials brace for inauguration
Jan. 16 (UPI) -- Capitol police is Washington, D.C., said they arrested a Virginia man who tried to enter a restricted area and was found to have fake credentials and a loaded high-capacity magazine gun.

World News // 2 hours ago
Armin Laschet, Merkel ally, elected head of Germany's CDU party
Jan. 16 (UPI) -- German Parliament member Armin Laschet was elected leader of the Christian Democrats and may be next in line to replace Chancellor Angela Merkel when she steps down in September.