BONN, Germany, Sept. 27 -- Germany's Gerhard Fritz Kurt Schroeder, the man who soon replaces Helmut Kohl as chancellor, is a business-friendly and hugely popular leader of the center-left. His Social Democrat Party's win Sunday over the 16-year incumbency of Kohl and Kohl's Christian Democratic Party is the result of merging traditional SDP blue collar support to include Germany's traditionally conservative craftsmen and other business interests. And he did it as a skilled orator, known to turn on the charm quickly. He is adept at turning adverse situations to his advantage, and full of disarming candor about a series of marriages and messy divorces. For Europe, the 54-year-old Schroeder embodies the Social Democrats' effort to tone down ideology, capture the political center and rally behind him the voters tired of the Kohl era. And in the wake of his apparent 41 to 35 percent Sunday victory over Kohl's CDU, Schroeder joins the ascendancy of the center-left elsewhere in Europe -- notably alongside leaders in Britain, France and Italy. He is much like Tony Blair, Lionel Jospin and Romano Prodi at the head of Social Democratic governments. Kohl, 68, looked tired when he learned about the defeat. He said, 'I wish Herr Schroeder the best of luck and a successful time in office.' Kohl's government will continue in a caretaker role until a new coalition is formed. President Clinton telephoned Schroeder late Sunday to congratulate him, but did not reach Kohl. Clinton said in a statement that he and all Americans thank Kohl for his role in European stability and world peace.

Born to a war widow in a Westfalian village in April, 1944, Schroeder is the younger of two children. The new chancellor-elect never knew his father, a Wehrmacht conscript killed in Romania during the German World War II retreat from Russia. His mother, a cleaning lady for 40 years, kept the family going amid crushing poverty. For several years she cleaned British army barracks. She later remarried and Schroeder has two step-sisters and a step- brother as well as an older sister. Schroeder came up the hard way, fighting to prominence through education, skill and sheer willpower. While it remains difficult to identify any core political beliefs and values, his humble origins have left him with some small degree of resentment of privilege. In 1981, he sparked controversy in his maiden speech in the Bonn parliament as the first member to address the Bundestag not wearing a tie. However, these days his sartorial elegance and telegenic delivery - all silk ties, Italian suits and warm smiles - have the same effect of raising eyebrows among the traditionalists who see him as a show-off. Schroeder left school at 14 to become a crockery salesman. He went to night-school as a teenager, obtaining the highest possible marks and went on to study law in the Lower Saxony university town of Goettingen. At 19 he started on his political career by joining the SPD, four years after its historic decision to ditch Marxism and the class war. It was also in Goettingen that he married the first of four wives, librarian Eva Schubach. That marriage lasted three years; his next to a schoolteacher lasted nine; his third lasted 12 years with his then-wife, Hiltrud Hampel, calling him 'a coward, an opportunist and an egotist.' He eloped with Bavarian journalist Doris Koepf, whom he married quietly last year and with whom he shares a modest three-room flat in Hanover. In the late 1970s, Schroeder won a reputation as a radical gaining leadership of the Jusos, the SDP's youth wing. At the times, he allied himself with the hard left to gain its support, then ditched it once he was elected Jusos leader. He practiced as a lawyer and is openly contemptuous of members of Parliament who do not hold regular jobs. Entering the Bonn parliament in 1980, he won the SPD nomination for Lower Saxony prime minister in 1984, secured that office in 1990 and earlier this year won his third term as state prime minister. It was that third term which secured him the chancellorship candidacy. Schroeder, like Kohl, is what the Germans call a Machtmensch -- a man of power. --- 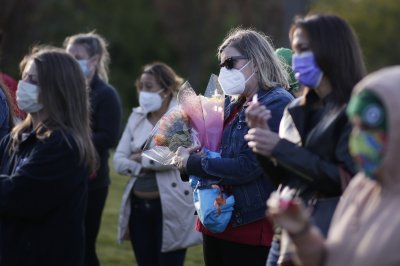