PALM SPRINGS, Calif., Jan. 9 -- Entertainer Cher said that preparing a eulogy for her former husband, Calif. Congressman Sonny Bono, was 'probably the most important thing I've ever done in my life. ' The actress-singer tearfully told the crowd today at St. Theresa's Catholic Church in Palm Springs that her former singing partner was in 'some place loving' the fact that she'd spent the past 48 hours writing the eulogy. Cher credited Bono with taking an introverted 16-year-old girl and creating the act that made the two of them 'the most beloved couple of our generation.' She said, 'He had the confidence to be the butt of the joke because he created the joke.' She called him 'the most unforgettable character I've ever met,' and said that would never change no matter how long she lives or who she meets. Her eulogy was more somber than those given by House Speaker Newt Gingrich, Calif. Gov. Pete Wilson and former state Republican leader Bruce Herschensohn. They offered humorous insights into the pop-star- turned-politician, who was killed Monday in a skiing accident. But her emotional tribute to her 62-year-old ex-husband had a few light moments, including her recollection of his 'weird hairdo between Caesar and Napoleon' the first time she met him. In a remark that sent laughter coursing through the church, Cher said Bono claimed he was a descendant of Napoleon and his family's name had been shortened from Bonaparte to Bono when they moved to the United States.

Former Vice President Dan Quayle, U.S. Interior Secretary Bruce Babbitt and hundreds of others were also on hand to pay tribute to Bono, who was buried at Desert Memorial Park in Cathedral City, about 115 miles southeast of Los Angeles. Cher was among those on hand at the cemetery to console his fourth wife, Mary, and their two young children. --- 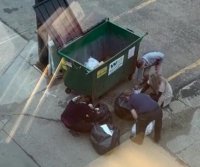 Odd News // 22 minutes ago
Bank employees climb into dumpster to search for wedding ring
April 23 (UPI) -- A North Dakota bank employee was reunited with her lost wedding band after her coworkers went diving in the dumpster -- only to later discover the ring was in the parking lot.

Odd News // 1 hour ago
Bear rips hole in Connecticut family's garage door
April 23 (UPI) -- A Connecticut woman who heard a loud noise in front of her home discovered a bear had ripped a hole in her garage door.

Odd News // 2 hours ago
Family's camera found seven years after falling into Florida bay
April 23 (UPI) -- A charter boat company in Florida used Facebook to reunite a family with the camera they dropped into a river seven years earlier.

Odd News // 3 hours ago
Dog joins Utah track meet relay race, wins
April 23 (UPI) -- Video footage of a high school track meet in Utah is going viral after a dog ran out onto the track and was the first across the finish line in a relay race.

Odd News // 22 hours ago
Paraglider's lost sunglasses land in her lap in midair
April 22 (UPI) -- A woman going tandem skydiving over Turkey lost her sunglasses when they flew off her face -- and was reunited with them moments later when they landed on her lap.

Odd News // 23 hours ago
$46,000 cash found under floorboards of Massachusetts home
April 22 (UPI) -- A Massachusetts family hired a professional treasure hunter to investigate decades-old rumors of money hidden in their home -- and he found $46,000 under the floorboards.