ARLINGTON, Va., Dec. 4 -- Gannett Co. Inc. announced Monday it has closed its $1.7 billion purchase of Multimedia Inc., moving it into the cable and television programming businesses. Gannett gains five television stations, two radio stations, 10 daily newspapers, 49 non-dailies, 150 cable TV franchises that reach 454,000 subscribers and syndicated TV talk-show programs including 'Donahue,' 'Sally Jessy Raphael,' 'Jerry Springer' and 'Rush Limbaugh.' Gannett paid Multimedia shareholders $45.25 a share. It also will assume or retire Multimedia's existing debt. The merged company will be nation's seventh largest TV group owner with 15 stations and 14.1 percent of the national audience. Gannett also will own 20 radio stations, USA Today and 82 other newspapers. It already was the nation's largest newspaper publisher prior to the deal and now has properties with 6.6 million daily subscribers. Current Federal Communications Commission rules bar a company from owning more than 12 TV stations, so Gannett is counting on Congress easing that limit as part of the telecommunications deregulation legislation pending in a House-Senate conference committee. If the legislation does not go through, Gannett has said it will unload WMAZ in Macon, Ga., KOCO in Oklahoma City and WLWT in Cincinnati. Gannett had sought an 18-month waiver of the ownership rule, but the agency granted it a 12-month waiver last week. Gannett also has told the FCC it will sell radio stations WMAZ-AM and WAYS-FM in Macon, Ga. Multimedia, of Greenville, S.C., hired investment bankers Goldman Sachs earlier this year to explore strategic alternatives, sparking speculation for months about possible bidders.

Analysts believe Multimedia, which generated earnings of $90 million on revenues of $630.5 million last year, considered selling the assets in separate packages in a deal that could have fetched $2 billion. The company may have decided against such a move because major shareholders would have faced tax consequences if the entire company were sold at once. The Multimedia TV stations include NBC affiliates in St. Louis, Cincinnati, Cleveland and Knoxville, Tenn., and the CBS affiliate in Macon, Ga. Analysts have said the quintet would be worth about $750 million.

Odd News // 16 hours ago
Ontario man collects his second big lottery prize in under a year
Sept. 20 (UPI) -- An Ontario man welcomed his second dose of lottery luck when he scored a $78,000 prize less than a year after winning $39,000.

Odd News // 16 hours ago
Florida woman's lost dog turns up on Facebook nearly a year later
Sept. 20 (UPI) -- A 15-year-old dog that went missing from his owner's Florida home was reunited with the woman nearly a year later when she spotted his photo on an animal rescue's social media page. 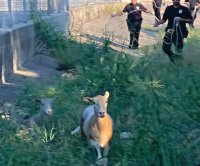 Odd News // 18 hours ago
Escaped sheep lead Texas officers on highway foot chase
Sept. 20 (UPI) -- A pair of sheep got loose from their pen in Texas and led animal care officers on a foot chase that at one point ended up on a busy highway.

Odd News // 19 hours ago
Ghost town remnants emerge from drought-stricken Utah reservoir
Sept. 20 (UPI) -- Drought conditions in a Utah reservoir led to the revealing of an unusual piece of the state's history -- the remnants of a ghost town.