COLUMBIA, S.C., Nov. 11 -- Danny Wuerffel threw five touchdown passes in the first half Saturday night, putting No. 3 Florida in the Southeastern Conference championship game with a 63-7 rout of South Carolina. Elijah Williams scored three times as the Gators (9-0, 6-0 SEC) sewed up their fourth consecutive SEC East title. They advanced to a SEC Championship showdown Dec. 2 against No. 15 Arkansas, which locked up the Western Division crown last week. Wuerffel threw four scoring passes in an 11:39 span as the Gators captured their 11th straight SEC road win with its biggest output of the season. South Carolina quarterback Steve Taneyhill, who entered the game with 27 touchdown passes, did not throw one against the Gators. The Gamecocks (4-5-1, 2-5-1 SEC) were eliminated from bowl contention. Wuerffel completed 19 of 24 passes for 304 yards in slightly more than two quarters. Chris Doering caught six passes for 98 yards, Ike Hilliard caught five for 75 yards and Williams had five catches for 61 yards. Taneyhill was just 10-for-18 for 74 yards and was sacked three times as South Carolina was outgained, 612 yards to 128. After watching top-ranked Nebraska and second-ranked Ohio State post 41-3 victories in the afternoon, Florida wasted no time in starting a blowout of its own. Williams capped an 85-yard march with a 3-yard touchdown run just 4:04 into the contest. The scoring blitz began with Florida's next score, a 2-yard TD toss from Wuerffel to Ike Hilliard with 2;34 left in the first period.

A blocked punt set up Wuerffel's 18-yard scoring pass to Hilliard just 1:53 into the second quarter, making the score 21-0. Wuerffel hit Williams with a 27-yard TD pass and connected with Hilliard again on a 25-yarder less than two minutes apart midway through the period for a 35-0 bulge. South Carolina finally scored with 51 seconds left in the half on a 2-yard run by Duce Staley, but the Gamecocks left the Gators too much time. Wuerffel moved Florida 65 yards in three plays, capped by a 17- yard pass to Doering with seven seconds to go in the half. Williams made the score 49-7 with a 38-yard scamper midway through the third quarter and Florida emptied the bench. Backup quarterback Eric Kresser, who threw for 452 yards last week, connected with Jacquez Green on a 39-yard touchdown pass on the first play of the final period. Ernie Dubose had a 2-yard scoring jaunt to close the scoring.

Health News // 3 hours ago
Emergency health transport can carry surprise big bills
Money is the last thing on anyone's mind during a medical emergency, but new research shows many patients could be hit with huge bills for that ambulance drive or helicopter flight to the hospital.

Health News // 6 hours ago
Bacterial colonies of tumors could guide cancer care
The human body is teeming with bacteria, and a new study finds the same is true of many cancers -- raising questions about what role microbes might play in the diseases.

U.S. News // 7 hours ago
Police ID remains on Long Island beach as woman killed in 2000
May 28 (UPI) -- Police in New York on Thursday released the identity of a woman killed during a string of slayings in Long Island 20 years ago.

World News // 9 hours ago
AstraZeneca strikes deal with Oxford Biomedica to make COVID-19 vaccine
May 28 (UPI) -- AstraZeneca and Oxford Biomedica announced a deal Thursday to work together to manufacture a potential vaccine for COVID-19 that is set to enter advanced trials in June.

U.S. News // 9 hours ago
FEMA says it's ready for hurricane season with budget boosted by COVID-19 stimulus
May 28 (UPI) -- The Federal Emergency Management Agency is "in a really great place" in terms of funding as hurricane season gets underway, the agency's chief said Thursday. 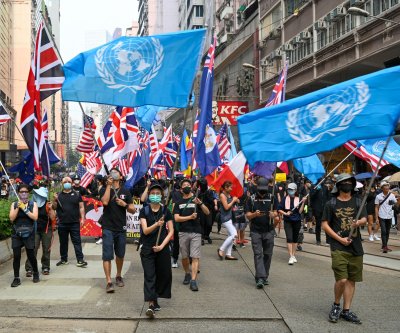 World News // 10 hours ago
Britain considering opening citizenship to some in Hong Kong
May 28 (UPI) -- British Foreign Secretary Dominic Raab said Thursday the country would consider removing barriers to citizenship for about 300,000 people in Hong Kong after China passed a controversial security law.