LOS ANGELES, July 6 -- In an anticlimactic ending to 92 days of testimony from 58 witnesses and nearly 500 pieces of evidence, prosecutors rested their double-murder case Thursday against football legend O.J. Simpson without calling the mother of victim Nicole Brown Simpson as their last witness. Deputy District Attorney Marcia Clark said quietly, 'The people rest,' after agreeing with the defense to stipulations about the testimony of Nicole Simpson's mother, Juditha Brown, as well as telephone records and autopsy and crime scene photos that were briefly shown again to the jury. The government decided to end its case without presenting emotional testimony about domestic violence allegedly perpetrated by Simpson on his ex-wife for years before her murder. They also did not mention the famous low-speed chase that captivated much of the nation. Prosecutors concentrated much of their case on sophisticated DNA tests linking Simpson and murder victims Nicole Simpson and Ronald Goldman to blood found at the murder scene and in Simpson's white Ford Bronco, and wrapped up their case with an FBI hair and fiber expert who again linked Simpson and the murder victims. Simpson, 47, is standing trial in Superior Court on two counts of first-degree murder for the June 12, 1994 stabbing and slashing deaths of his ex-wife and her friend outside her Brentwood condominium. The former football hero-turned-actor could spend the rest of his life in prison ifconvicted. The prosecution's case against Simpson will officially rest after Judge Lance Ito determines which of the 488 government exhibits will be admitted into evidence and available to the jury during its deliberations.

The jurors -- who have been sequestered since Jan. 11 to try to keep them from being tainted by outside influences -- appeared to be blank- faced after hearing Clark's announcement. Ito told the panel they would get a long weekend and asked if any of them wanted to take his place in dealing with legal matters associated with the case. The jurors smiled in response. Legal experts questioned the prosecution's decision to end with the technical testimony of FBI Agent Douglas Deedrick, rather than a witness such as Juditha Brown -- the last person listed on the prosecution's witness list. In a stipulation read before the jury, Clark said Juditha Brown had left a pair of eyeglasses at the restaurant where Nicole Simpson ate her last meal, called the restaurant and then talked to her daughter for the last time in a 9:40 p.m. telephone call the night of the murders. If she had testified, Juditha Brown's account likely would have brought an emotional end to the prosecution's case and provided jurors with a powerful reminder of the family members that had been left behind. 'I think they ended on a very undramatic note which suggested disorganization among the prosecution,' said Robert Pugsley, a Southwestern University Law School professor who has been monitoring the trial. 'It didn't seem a very powerful ending, (it) almost seemed like a sigh of relief.' But other experts said the prosecution may have been influenced by reports that at least one former juror believed that the emotional and teary testimony of Nicole Simpson's sister, Denise Brown, had seemed like acting. Simpson and his lawyers indicated Thursday they intend to present a 'lean' defense case that is scheduled to begin next Monday morning. Earlier Thursday, chief defense attorney Johnnie Cochran Jr. said he expected the defense case to last four to six weeks. 'You've discussed with your client his right at this point not to present a defense?' Ito asked Cochran. 'He understands he has the right to rest upon the evidence as it's been presented by the prosecution?' 'He does understand that, your honor,' Cochran responded. 'Is that correct, Mr. Simpson?' Ito asked the defendant. 'That is correct,' Simpson replied. Cochran also told the judge the defense is considering whether it should argue that the prosecution has presented insufficient evidence and the case against Simpson should be dismissed. Simpson's lawyers have indicated they intend to call employees of a Chicago hotel where Simpson stayed the morning after the murders and people on board to and from Los Angeles to Chicago to testify about Simpson's demeanor in the hours after the killings. The defense team also may call several members of Simpson's family, but have not yet announced a decision on whether Simpson will take the stand in his own defense. The charismatic football legend and actor is said to be anxious to testify. Earlier Thursday, the prosecution had ended its case with Deedrick, who reiterated his confidence in the analysis of hairs and fibers linking Simpson and the murder victims to crucial evidence at the murder scene, at Simpson's estate and in his Ford Bronco. In a less-than-withering cross-examination, defense lawyer F. Lee Bailey elicited the FBI agent's testimony that a known sample of Simpson's close-cropped hair taken after his arrest contained dandruff, while the hairs found on murder scene evidence did not contain dandruff. During a second round of questioning by prosecutor Marcia Clark, Deedrick said Simpson's dandruff may have started during his jail stay because of changes in his hygiene and the type of shampoo he used. Reiterating the defense team's oft-repeated theory of contamination, Bailey suggested that crucial evidence, such as hairs, may have been mixed up by police or criminalists before it was sent to other laboratories for analysis. 'You have to know whether or not a fiber or hair that you find to be significant actually came from where it says in the papers that it came from?' Bailey asked the veteran FBI agent. 'Right. We're at the mercy of those that collect and send the evidence to us,' Deedrick acknowledged. The FBI expert cited 'very distinctive characteristics' in Simpson's hair, and said the same type of characteristics were found in hair on a knit cap left at the murder scene and a strand of hair on Goldman's long-sleeved shirt. 'I stand by my results,' Deedrick told the jury. The FBI agent said he did not even know about results of sophisticated DNA tests linking Simpson and the murder victims to blood found at the murder scene and in Simpson's Ford Bronco when he analyzed the hair and fiber samples. Also Thursday, the judge interviewed the panel's 12 jurors and two alternates to determine if a former juror ousted for misconduct had tried to communicate with other jurors. Ito said he had met individually with the jurors to determine if 'one of our jurors who had been dismissed for misconduct for communicating and writing notes to other jurors had indeed communicated with one of the sitting jurors. 'The court had to conduct an inquiry as to whether or not such communications were received and what the content was,' the judge said. 'And the court conducted an individual interview of each one of our jurors, and we will proceed.' Ito did not release any further details about the meetings or specify which of the 10 ousted jurors may have tried to communicate with any of the remaining members. Former juror Farron Chavarria was dismissed last month for reportedly writing a note to another ex-juror, Francine Florio-Bunten, before her ouster in May. The interviews had forced a 1 1/2-hour delay in Deedrick's testimony.

Odd News // 13 hours ago
Ontario man collects his second big lottery prize in under a year
Sept. 20 (UPI) -- An Ontario man welcomed his second dose of lottery luck when he scored a $78,000 prize less than a year after winning $39,000.

Odd News // 13 hours ago
Florida woman's lost dog turns up on Facebook nearly a year later
Sept. 20 (UPI) -- A 15-year-old dog that went missing from his owner's Florida home was reunited with the woman nearly a year later when she spotted his photo on an animal rescue's social media page. 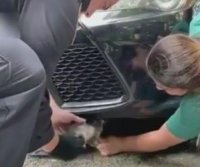 Odd News // 15 hours ago
Escaped sheep lead Texas officers on highway foot chase
Sept. 20 (UPI) -- A pair of sheep got loose from their pen in Texas and led animal care officers on a foot chase that at one point ended up on a busy highway.

Odd News // 16 hours ago
Ghost town remnants emerge from drought-stricken Utah reservoir
Sept. 20 (UPI) -- Drought conditions in a Utah reservoir led to the revealing of an unusual piece of the state's history -- the remnants of a ghost town.