LOS ANGELES, June 15 -- In a dramatic display for the jury, O.J. Simpson tried on a pair of bloodstained leather gloves Thursday that the prosecution contends links him to the murders of his ex-wife and her friend. Apparently unhappy at being ordered to try on the extra-large brown gloves, Simpson grimaced as he appeared to struggle to put on the gloves over a pair of latex gloves with his fingers splayed apart. At one point, Simpson muttered, 'Too tight.' Deputy District Attorney Christopher Darden, who had asked Simpson to try on the gloves, suggested Simpson had intentionally held his thumb to make it more difficult for him to put the gloves on. Flanked by two sheriff's deputies, Simpson stood in front of the jury box, shrugged his shoulders and held up his gloved hands after repeatedly yanking at the gloves. Simpson also picked up a pen and balled his fist as part of the demonstration, then quickly and apparently easily pulled off the gloves after the display. The left-handed glove was found at the murder scene near the body of Nicole Brown Simpson's friend, Ronald Goldman. Police have said the right-handed glove was found behind an air-conditioning unit at Simpson's mansion 2 miles from the murder scene. Genetic tests showed a mixture of blood matching that of Simpson and the two victims on that glove. Simpson, 47, is standing trial in Superior Court on two counts of first-degree murder for the June 12, 1994 stabbing and slashing deaths of his ex-wife, Nicole Simpson, 35, and Goldman, 25, outside her condominium.

He has pleaded 'absolutely 100 percent not guilty' to the charges. For the benefit of the court reporter, Darden narrated the demonstration, saying 'Mr. Simpson is telling the jury the glove is too tight...Mr. Simpson is indicating that the fingers aren't all the way into the gloves, your honor. Mr. Simpson has told the jury the gloves are too small.' The frustrated prosecutor asked the judge, 'Could we ask him to straighten his fingers and put them in the gloves as one would normally put them in the gloves?' Ito refused to order Simpson to put on the gloves any differently. Moments later, a former executive with the company that manufactured the gloves inspected Simpson's hands and said they 'should be able to fit into those leather gloves.' Richard Rubin said Simpson's hands appeared to require a large or extra-large glove, and that the latex gloves may have affected the way the leather gloves fit on Simpson's hands. Outside court, defense lawyer Carl Douglas said, 'All the jury could tell, the judge could tell, the district attorney could tell -- the gloves did not fit.' 'I don't think you could act the size of your hands,' lead defense attorney Johnnie Cochran said, adding, 'Those gloves are really worn in the center. That's not a pair of gloves he would have worn.' The display, near the end of the court session Thursday, was among the most dramatic presentations in the trial's 5 1/2 months of testimony. Jurors appeared attentive during the demonstration, but showed little reaction. Also Thursday, a buyer with Bloomingdale's department store in New York City presented a credit card receipt showing that Nicole Brown had bought two pairs of gloves in December 1990. Bloomingdale's employee Brenda Vemich said she believes Nicole Brown bought two pairs of Aris light leather gloves for $77, which she said appeared to be the same type as the gloves linked to the murders. The buyer said the gloves were designed and developed exclusively for Bloomingdale's, and estimated that 200 to 240 extra-large brown gloves of that style were sold that year. 'The reason they sold from my experience in waiting on customers is that they were almost like a second skin,' Vemich said. 'You could pick up a penny or a needle with them and they were very, very thin.' During cross-examination, Cochran noted that the receipt's product code mistakenly corresponded with a product line that Bloomingdale's did not carry, and suggested instead that it was an entirely different type of glove that Nicole Brown Simpson might have purchased. Before Simpson was ordered to try on the gloves, Cochran himself had tried on the gloves and noted they were 'too small.' 'It's too big,' Vemich retorted, saying later that they were too baggy on Cochran. In other developments Thursday: --chief Los Angeles County Coroner Lakshmanan Sathyavagiswaran testified he believes Goldman tried to duck and twist away from his attacker and 'didn't have a chance,' refusing to go along with a theory by Simpson lawyer Robert Shapiro that the young man put up a tough fight for his life. 'I don't think he fought the attacker in the manner you're portraying because he is trying to avoid the wounds as I see it. If the attacker quickly incapacitated them, you may not see injuries on the attacker,' said the coroner, who tied police criminalist Dennis Fung for a record nine days on the stand. The defense has suggested that the killer should have been injured in such a violent struggle, while Simpson's only visible injury was a cut on his middle finger. --prosecutors filed a motion asking the judge to let them tell the jury about several more instances of alleged abuse of Nicole Simpson by her ex-husband. The incidents listed in the motion include a witness who says she saw Simpson yell at his former wife and shove her against a Bentley, and a babysitter who said Nicole Simpson told her that Simpson 'continued to beat her even though he had sworn he would not do it any more' after a January 1989 incident in which Simpson pleaded no contest to spousal battery. ----Court papers filed by the defense accuse Superior Court Judge Lance Ito of unfairly dismissing jurors. The motion charges that Ito dismissed one or more jurors perceived to be favorable to the defense to balance the dismissal of jurors believed favorable to the prosecution. Since the jury was sequestered in January, 10 jurors have been dismissed for a number of reasons. Twelve jurors and two alternates remain, and the defense contends that the prosecution may have engineered the investigation and 'selective disqualification' of jurors to try to force a mistrial.

Odd News // 13 hours ago
Ontario man collects his second big lottery prize in under a year
Sept. 20 (UPI) -- An Ontario man welcomed his second dose of lottery luck when he scored a $78,000 prize less than a year after winning $39,000.

Odd News // 13 hours ago
Florida woman's lost dog turns up on Facebook nearly a year later
Sept. 20 (UPI) -- A 15-year-old dog that went missing from his owner's Florida home was reunited with the woman nearly a year later when she spotted his photo on an animal rescue's social media page.

Odd News // 15 hours ago
Escaped sheep lead Texas officers on highway foot chase
Sept. 20 (UPI) -- A pair of sheep got loose from their pen in Texas and led animal care officers on a foot chase that at one point ended up on a busy highway. 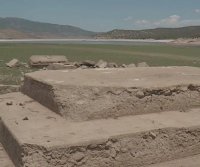 Odd News // 16 hours ago
Ghost town remnants emerge from drought-stricken Utah reservoir
Sept. 20 (UPI) -- Drought conditions in a Utah reservoir led to the revealing of an unusual piece of the state's history -- the remnants of a ghost town.