WASHINGTON, May 3 -- Timothy McVeigh, the only suspect directly charged in the Oklahoma City federal building bombing, was a member of the National Rifle Association from 1990-94, the NRA said Wednesday. But an NRA spokesman said McVeigh does not appear to have corresponded with the organization apart from his membership. The organization searched its files for references to McVeigh Wednesday at the request of United Press International. McVeigh did write a letter to Rep. John LaFalce, D-N.Y., three years ago critical of New York state laws on weapons used for self-defense, the congressman announced Tuesday. LaFalce said he discovered the letter from McVeigh, written when the suspect was a resident of the Buffalo area, after a search of his computerized correspondence files, and turned it over to the FBI on April 25. On Tuesday, LaFalce also released the envelope that contained the letter, which had a stamp reading 'I'm the NRA' attached to the back. An NRA spokesman said McVeigh's 'membership expired a little over a year ago.' The spokesman declined to say what addresses McVeigh used in his yearly application to the organization, saying it was against NRA policy to release that type of information to the media. He also declined to say whether the FBI, which has been going over McVeigh's background intensively in the last two weeks, has requested the NRA's files on the suspect, but stressed that cooperating with law enforcement is a 'longstanding policy' of the organization. The FBI declined comment.

McVeigh, 27, has been charged in the bombing that tore apart an Oklahoma City federal building, killing at least 141 people and injuring more than 400. Another 35 people are missing. McVeigh was arrested for driving without a license plate by an Oklahoma police officer about 60 miles north of Oklahoma City only an hour and a half after the bombing. McVeigh was already in jail when an agent for the Bureau of Alcohol, Tobacco and Firearms ran a police computer check on his name and discovered his whereabouts. The FBI believes McVeigh is one of two men who allegedly rented a truck used to deliver the bomb. Two of his associates, James and Terry Nichols, have been charged with conspiring with McVeigh to possess 'destructive devices' at the Nichols family farm in Decker, Mich., from 1992 through 1995. The Nichols brothers are being held only as 'material witnesses' in the Oklahoma City bombing. Two other men, arrested as possible material witnesses in Carthage, Mo., Tuesday, have been questioned and released by the FBI. 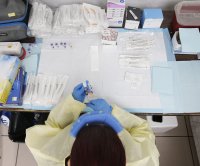