By
BY PAUL BASKEN

WASHINGTON, April 26, 1995 (UPI) -- President Clinton, for the second time in four days, Wednesday proposed a new series of steps to crack down on terrorism, including the hiring of 1,000 new federal agents and prosecutors, and allowing the military an expanded role in domestic law enforcement.

Clinton, in his second wave of proposals for Congress in the wake of last week's Oklahoma City bombing, also proposed the enactment of new laws to better allow the tracking and control of explosives, chemical weapons and other weapons of mass destruction, and tougher measures against violators.

Clinton had proposed an initial set of reforms Sunday, while visiting Oklahoma to lead a memorial service for the estimated 200 people killed in the blast, which would give federal agents additional powers ''to prevent terrorism and infiltrate and crack terrorist networks, both foreign and domestic.''

Clinton, announcing his new proposals at a White House meeting Wednesday with the top congressional leaders from both parties, said the reforms were ''grounded in common sense and steeled with force.''

''We must move on these law enforcement measures quickly,'' Clinton said at the meeting, flanked on each side in his Cabinet Room by House Speaker Newt Gingrich and Senate Republican leader Bob Dole and surrounded by a dozen more lawmakers from both parties.

''We must move so that we can prevent this kind of thing from happening again. We cannot allow our entire country to be subjected to the horrors that the people of Oklahoma City endured,'' Clinton said. ''We can prevent it, and must do everything we can to prevent it.''

Dole, emerging from the meeting an hour later alongside Gingrich and their Democratic counterparts from Capitol Hill, said he was eager to act quickly on Clinton's recommendations in a bipartisan manner. The Republican-led Congress planned to begin hearings on the matter Thursday, Dole said.

''I know that we will do this together without regard to party, and I'm looking forward to this discussion of it,'' Clinton said.

Dole and Gingrich said they might take additional steps on their own, although Dole said they also wanted ''to be very certain, very careful'' not to go too far in terms of both budgetary and civil liberties limits.

Senate Democratic leader Tom Daschle agreed, saying there were ''both legal as well as fiscal issues that we have to address.''

Gingrich also envisioned legislation that ''protects our civil liberties while also protecting us,'' and suggested the process of producing it might be slower.

Clinton, asked whether civil libertarians were justified in fearing that the heat of the moment might produce reforms that go too far in eroding constitutional protections, said: ''I think we can strike the right balance. We've got to do more to protect the American people.''

Administration officials said they had no immediate total budget figure for the president's recommendations, although Sen. Don Nickles, R-Okla., said the 1,000 new federal agents, prosecutors and other officials would cost an estimated $1.2 billion over five years.

Clinton, among his other recommendations announced Wednesday, proposed legislation that would:

--require, within one year, the inclusion of microscopic particles in ingredients used in bombs that would permit those materials to be traced after an explosion.

--require a study of methods of such tracing, as well as methods of placing additional controls and rendering inert the common chemicals used in bomb-making.

--amend the federal law known as the ''Posse Comitatus Act,'' which severely restricts the military's participation in domestic law enforcement, to allow it to join efforts against the criminal use of weapons of mass destruction.

--amend the Electronic Communications Privacy Act of 1986 to ''constitutionally enhance'' the use of electronic surveillance to fight terrorism.

--provide enhanced penalties for crimes committed against any federal employee and his or her immediate family because of the official duties of the employee.

--increase the penalty for anyone convicted of transferring a firearm or explosive with the knowledge that it will be used to commit a crime of violence or drug trafficking.

--amend the federal law that criminalizes chemical weapons to include those in both liquid and solid forms.

--make it illegal to possess explosives known to be stolen.

--extend from three to five years the statute of limitations for violations of the National Firearms Act, which covers explosives and incendiary bombs.

Clinton, among the previous recommendations he outlined Sunday, proposed legislation to fund the expanded use of court-authorized electronic surveillance of terrorist and criminal networks; create a special FBI counter-terrorism and counterintelligence fund; and create an FBI-led interagency domestic counter-terrorism center. 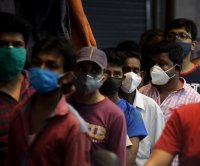 Health News // 8 hours ago
FDA: Magnets in cellphones, smartwatches may affect pacemakers
The U.S. Food and Drug Administration is warning that strong magnets in some cellphones and smartwatches can interfere with pacemakers and other implanted medical devices.