WASHINGTON, March 21 -- Dan Glickman, President Clinton's choice to run the Agriculture Department, voiced support Tuesday for boosting U.S. farm exports amid a Senate panel's concerns over his rejection of a global trade pact while he was a lame-duck congressman. The former Kansas representative would replace Mike Espy, who resigned last year to fight allegations he took improper gifts from poultry officials regulated by the USDA. The Senate must approve Clinton's appointment. After about seven hours of testimony, the panel agreed to cancel what was expected to be at least one more full day of testimony. Members opted to submit their remaining questions in writing to Glickman, who said he would try to respond within 24 hours, and hold a final meeting possibly Friday to cast a vote on the nominee. During his hours before the panel, Glickman tried to play down any suggestion he opposed free trade during a confirmation hearing that otherwise heaped praise upon the Democrat, who spent nearly two decades on Capitol Hill until his defeat last November. 'The future of agriculture is expanded world trade, and I will do everything in my power to fulfill it,' he told the Senate Agriculture Committee. 'The Europeans have a strategy, a very specific strategy. By working cooperatively with the private sector, we ought to have a strategy to dominate the world market.' Concerns were raised by the panel about Glickman's rejection late last November of the latest accord under the General Agreement on Tariffs and Trade.

'I'm not very happy with that vote. It's not a plus,' said Sen. Richard Lugar, R-Ind. and chairman of the committee. But Glickman, who served 18 years on the House Agriculture Committee, defended his vote, said he was fulfilling a promise to constituents. Congress wound up passing the trade pact. Aside from the questions about the GATT vote, Glickman received a very warm reception by the Senate committee and was repeatedly lauded by Republicans and Democrats alike as lawmakers begin work on a massive farm bill. Said Lugar: 'I think he's made an excellent start this morning.' That is a welcome change for the administration, which has spent much time battling for controversial nominees, most recently Surgeon General- designate Dr. Henry Foster Jr., and defending Cabinet officials under investigation by the Justice Department. During the hearing, Sen. Kent Conrad, D-N.D., worried about the effect of the latest GATT accord on agriculture, which accounts for 15 percent of the nation's gross domestic product and employs one of every six workers in the United States. 'Most Americans assumed that what we were getting under the General Agreement on Tariffs and Trade was an even playing field. That's not going to happen,' he said. Conrad said the European Union has the advantage, which under the first year of GATT will set export subsidies for the EU at $13.1 billion compared to $1.2 billion for the United States. Said Glickman: 'I think there are some things we can do to improve subsidies, but I'm not in favor of eliminating them.' He noted there has been paring of agricultural programs in recent years and expressed opposition to proposals to make deeper cuts. 'American agriculture is in better shape than it was a decade ago. Exports are up,' Glickman said, noting overseas sales are expected to hit a 20-year high of $48 billion in 1995. 'I think we would be distrubing that trend if we made significant cuts.' He voiced support for changes to land-use and environmental regulations especially involving the Agriculture Department in their creation, to make regulations 'reasonable and farmer-friendly, as common sense as we can.' But he rejected a GOP proposal to halt regulations, saying that an arbitrary shutdown could affect public safety, especially by halting food inspection rules. Glickman also said a priority would be to continue to streamline the department, which employs more than 100,000, and review all programs, including a farm loan program under which the department forgave $12.6 billion in delinquent loans from 1989 to 1994. Sen. Jesse Helms, R-N.C., called for a review of the food-stamp program run by the Agriculture Department that he said eats up 42 percent of federal outlays for farming. 'It should cease to be a monstrous welfare agency and once again concentrate on farm programs and farm exports,' Helms said. 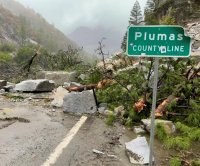