The British queen and French president inaugurated the $15.8 billion, 33-mile (50 km) cross-channel tunnel by cutting a red, white and blue ribbon just minutes after they arrived at the Coquelles station close to the tunnel entry near Calais in northwestern France.

They later took the train through the channel tunnel while riding in the queen's maroon Rolls Royce Phantom VI automobile. At Folkestone, England, they inaugurated the British side of the tunnel, unveiling a plaque and a statue at the terminal near the tunnel entryway.

Speaking after the ribbon-cutting ceremony in France, Mitterrand said the tunnel opening marked the culmination of 'two centuries of dreams and plans' and 'the will and perserverence of two countries.'

'Once Britain and France decide to work together and pool their vast resources, they can achieve great things,' the French president said.

The queen, speaking in French, referred to the differences between the two peoples and the turbulent history of their two countries, but she said that period had no come to an end.

'The French people and the British people, as different as they are from one region to another and from one person to another, and despite their age-old rivalry, complement each other much more than appears at first sight,' Queen Elizabeth said.

'Each recognizes and appreciates the merits and qualities of the other,' she said. 'Certainly our relations have known violent shocks during the centuries but these times have passed...The tunnel proclaims this simple truth.'

Queen Elizabeth and President Mitterrand arrived simultaneously in Coquelles aboard separate Eurostar high-speed trains for the tunnel opening. Their two trains pulled nose-to-nose to within few feet of each other.

Mitterrand and his wife, Danielle, disembarked on a red carpet, walked to the queen's train and welcomed her and Prince Philip to France. Mitterrand then escorted the queen, who wore a purple coat and hat, to the ribbon-cutting ceremony. After the playing of national anthems by a ceremonial military band, the queen and president snipped the ribbon to open the tunnel.

After the trip through the tunnel to southeast England, the queen and Mitterrand were greeted with a fly-by of five helicopters, three of them spewing red smoke. There were a series of other fly-bys by air force jets before the queen and president toured the Folkestone terminal.

Speaking at the English ceremony, the queen recalled that it was a Frenchman, Louis Bleriot, who first flew over the channel in 1909 while it was a Briton, Capt. Matthew Webb, who first swam across it in 1875.

'This impressive achievement which we inaugurate today opens a new dimension for travel and transport as we approach the beginning of a new millennium,' Queen Elizabeth said, adding that it was bound to stimulate new bonds of friendship and understanding between the two nations.

Mitterrand noted that his trip had been more comfortable than that of Bleriot or Webb because he'd been able to make it seated in the queen's very comfortable Rolls.

The tunnel opening also was attended by British Prime Minister John Major and French Prime Minister Edouard Balladur and other senior officials from the governments of the two countries. European Union President Jacques Delors attended, as did former Prime Minister Margaret Thatcher, who was in power in Britain when the project was started.

The ceremonies, under gray, rainy skies, followed a morning of ceremonies on both sides of the channel, with the British queen opening new international rail terminal at Waterloo station in London and Mitterrand and Belgian Prime Minister Jean-Luc Dehaene opening a new station at Lille.

The new rail link, whose construction was dogged by delays and spiraling costs, will allow people traveling by car to put their vehicles on a train and cross the channel in 35 minutes, compared with 75 minutes on the fastest seagoing car ferry.

The tunnel will also carry trucks, motorcycles and coaches on its Le Shuttle service. Foot passengers will travel on Eurostar trains which link Paris and Brussels directly with London via the tunnel.

Once the the high-speed rail link is completed in Britain, a train journey from London to Paris will take about 2.5 hours. 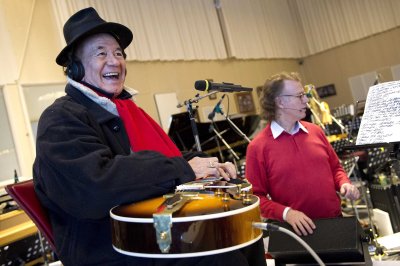