BONN, March 15 -- Just think of them as the Wright Brothers on skis.

The dream of flying like a bird has been one of mankind's most challenging quests for centuries. It was eventually made possible by technological progress and the heroics of Orville and Wilbur Wright.

Now, new aviating heroes, these wearing skis, continue to dream and soar in a bid to prove that man can fly.

This weekend, in the small northwest town of Planica, Slovenia, these brazen athletes will attempt to become the first to jump beyond 200 meters at the 13th Skiflying World Championships.

There are not many magic barriers left in sport. Men have run the 100 meters in less than 10 seconds for more than two decades. The four- minute mark in the mile was broken back in 1954 by Roger Bannister, and pole vaulter Sergei Bubka became the first to clear the bar at 20 feet in 1985.

However, in ski jumping, 200 feet has been an elusive mark.

In 1936, Austrian Joseph 'Buwi' Bradl was the first jumper to sail past 100 meters and in 1987 Poland's Piotr Fijas sailed 194 meters, the current world record. Both jumps were made at Plancia, site of the world's biggest hill.

Fifty-eight years after Bradl, another Austrian, Andreas Goldberger, is among those who will attempt to become the first to break 200 meters.

For Goldberger, a 200-meter jump would signifies more than a record.

'Who really remembers the world or Olympic champions of the past,' Goldberger asked. 'But that 'Buwi' Bradl was the first to beat the 100 meters has made him immortal. Every kid interested in the sport knows it. And that's why I want to be the first to fly beyond 200 meters.'

Others fliers with an eye on the 200 mark include: Germany's Dieter Thoma, Jaroslav Sakala of the Czech Republic, reigning champion Noriaki Kasai of Japan, and Norway's Olympic gold medalist Espen Bredesen.

'Of course I want to be the first, but I think that 210 or 215 meters are also possible,' Bredesen, 26, said after his win in Norway last month.

The revolutionary jumping style, where the athletes spread their skis in a V, and advances in technology -- slimmer skis, new bindings, aerodynamic suits -- have helped records tumble throughout the season, and Bredesen has been at the fore.

The new style enables long flights like Sakala's 190 meters 1993 in Bad Mitterndorf, Austria. However, it also led to reduced runup speeds, flights closer to the hill, and less pressure on landing. This may have led the International Ski Federation (FIS) to loosen its strict rule of not recognizing an official skiflying record.

In previous years the sport has seen a number of horrendous crashes, many caused by dangerous sidewinds and by excessive G-forces which knocked the jumpers down upon landing.

Because of the crashes as well as event organizers' unstoppable desire for new records, the FIS decided not to measure any distance further than 194 meters. Fijas' flight onto exactly that mark was never officially measured.

However, the International Skiflying Union (KOP) featuring owners of all the sport's hills has continued to record every distance. Led by Fijas, a total of 12 lepa of more than 190 meters have entered the books.

The FIS now allows long jumps providing the local organizer can present insurance which keeps FIS, the event's jury and the organizer, clear of any responsiblity in case of compensation claims.

The change coincided with the reshaping of the hill in Planica in a deliberate quest for the 200 meters. 'Where else if not in Planica,' say the proud Slovenians, and the athletes agree.

Goldberger's hunger has gone so far that he has even considered signing in as a forejumper.

'The forejumpers set the runup speed for the jury which until then has no clear idea about the conditions. There it could be possible to have the ideal conditions for a 200-meter jump. During the actual competition the jury will probably be a bit more cautious,' Goldberger explained.

Most experts believe the biggest chance for a jump beyond the magic barrier is at Friday's official training. The competition will be held Saturday and Sunday.

Odd News // 11 minutes ago
Bear crashes wedding reception in Mexico
Oct. 27 (UPI) -- A wedding in Mexico became an even more memorable event for everyone present when the reception was interrupted by an unusual crasher: a bear in search of food. 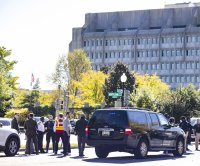 Odd News // 3 hours ago
Iowa bar offers cocktails and karaoke -- but no alcohol
Oct. 27 (UPI) -- A new bar in Iowa offers cocktails, karaoke and pizza, but there is one common bar feature absent from the business: alcohol. 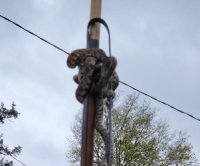 Odd News // 3 hours ago
Worker finds malfunctioning water well was full of snakes
Oct. 27 (UPI) -- A utility worker doing maintenance on a faulty water well in Iowa raised a pipe from the well and discovered it was covered in more than a half dozen snakes.
Advertisement