The trade group made the announcement after a major epoxy resin manufacturing line operated by Sumitomo Chemical Corp. in Niihama, Japan, resumed production after being shut down since July 4 due to an explosion. The blast killed one person.

The SIA said resumption of operations at the facility will boost production of the resin to meet worldwide semiconductor industry needs for the foreseeable future.

Prior to the explosion, the facility provided the semiconductor industry with 50 to 60 percent of the world's supply of epoxy cresol resin, an ingredient needed to manufacture the plastic housings used to package most integrated circuits.

'Out of this tragic incident, SIA member companies have demonstrated that highly competitive rivals in the marketplace can work together for the common good to resolve issues that threaten the industry,' said SIA executive Andrew A. Procassini. 'For now, the potential for shortages appears to have dissipated.'

Procassini said that following the explosion, Sumitomo and other materials suppliers had responded to industry concerns regarding potential shortages and worked to seek alternative supply sources. 'Sumitomo's effort to resume production on schedule has also helped avoid a possible shortfall in supply,' he said.

The trade group's key measure of orders to shipments -- its 'book-to- bill' ratio -- may have been artificially inflated in July and August by orders rising above normal levels due to uncertainty about epoxy resin supply.

The July ratio was a robust 1.12, meaning that for every $100 worth of products shipped (billed), manufacturers received $112 worth of new orders (bookings). The August ratio was 1.08, then declined to 1.01 in September and 1.00 in October -- the first time in 22 months that the figure had been that low.

October marked the 24th consecutive month that the 'book-to-bill' ratio has been at 1.0 or better, the longest such string since 1980. A ratio above 1.0 indicates the semiconductor market is expanding.

The trade group recently reported that worldwide semiconductor shipments are expected to grow by 29 percent this year and reach $77.3 billion. The increase is being powered by gains in the North American market, which is expected to rise to 34.5 percent to reach $24.8 billion in shipments this year. 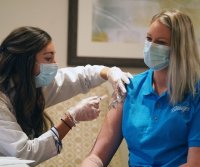 Odd News // 2 hours ago
Sloth bear rescued from well in Indian village
Dec. 8 (UPI) -- Wildlife authorities in India rescued a sloth bear that fell into a well while feasting on sugarcane in a village.