ELMONT, N.Y. -- When Prairie Bayou suffered its tragic injury in Saturday's Belmont Stakes, most people in the industry dismissed the incident as one of those things that happen in racing.

Prairie Bayou had to be humanely destroyed after suffering a shattered left front cannon bone while charging down the backstretch.

These things happen in racing, life goes on. Well, sort of.

Jockey Mike Smith, who rode Prairie Bayou, was so upset by the incident that he did not ride Jodi's Best in the next race. As it turned out, Jodi's Best won the day's final race with Chris Antley aboard.

Smith was very reluctant to talk to the press about the incident.

'I didn't sense that anything was going wrong at all. He got off on his left lead, but he always does that,' said Smith. 'He wasn't going bad at all. He just took a bad step, or something.'

Smith likened it to someone walking and spraining an ankle. The jockey described his special relationship with Prairie Bayou.

'I won a great race (the Preakness) on him, but it was his attitude, his personality -- he was just a great horse to be around.

'I used to play with him at the barn in the morning, graze him and stuff. He was a real sweet horse. So calm. You could put a kid on him and walk him around.

'Did you see him in the paddock? Other horses were acting up, nervous, but he was calm as anything. He had a great disposition.'

Smith said he will try to to put the disappointing incident behind him and ride in Sunday's meeting at Belmont.

Owner John Ed Anthony said the track was safe despite the heavy rain before the race.

'Let me emphasize that this was an absolutely sound horse. Perhaps the soundest horse in the barn,' he said. 'Galloping along at a very slow pace, in the back of the pack well within himself. Doing what he's always done, under no stress, not in a drive, in the first half of the race. ... it's something you can't explain.'

Anthony said it was impossible to save Prairie Bayou and any attempt at recuperation would have been too long and painful.

Veterinarian Dr. M.B. Teigland described the injury as one, which cannot be repaired.

'With the number of fractures involved, plus the soft tissue damage, it was impossible to surgically repair this injury,' Teigland said.

U.S. News // 1 hour ago
Texas court stays execution on intellectual disability grounds
Feb. 25 (UPI) -- The Texas Court of Criminal Appeals has stayed the execution of a man who says he's intellectually disabled and thus can't constitutionally be put to death. 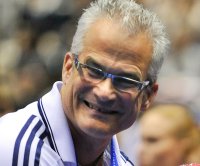 Health News // 3 hours ago
Dogs, children are 'in sync,' study shows
It is an image as heartwarming as any: Young children giggling as the family dog climbs all over them and licks their faces. But new research suggests the bond may be more than playful. 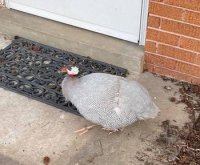 Odd News // 4 hours ago
Illinois police seeking owner of 'belligerent' guinea fowl
Feb. 25 (UPI) -- Police in Illinois said they are trying to find the owner of a "belligerent" and "foul smelling" guinea fowl found wandering loose in the town.