UPI NEWS AT A GLANCE

WASHINGTON -- The nation's jobless rate and number of Americans out of work remained unchanged in December and payrolls of non-farm U.S. businesses expanded marginally, the government said Friday. Labor said the jobless rate for last month was 7.3 percent.NEWLN:

CAMBRIDGE, Mass. -- Lawyers were ready Friday to lay out their strategy in the case of a former computer executive who says he is not criminally responsible for killing his wife and children last spring because he was insane. Kenneth Seguin has admitted bludgeoning his wife and slashing the throats of his young son and daughter.NEWLN:

PHILADELPHIA -- President Bush is being asked to pardon Pvt. Eddie Slovik before he leaves office. Slovik, the only U.S. soldier executed for desertion since the Civil War, died by firing squad in World War II.NEWLN:

MEMPHIS, Tenn. -- The release of a commemorative Elvis Presley stamp prompted thousands of fans to gather at the singer's former home, some for nearly 18 hours, officials said Thursday. The stamp went on sale early Friday at Presley's Graceland mansion and was scheduled to be released nationally at noon.NEWLN:

LUANDA, Angola -- The Angolan government, strengthened by victories on the battlefield, has hardened its attitude towards the rebels and indicated it would dictate the pace and form of peace negotiations. Prime Minister Marcolino Moco said rebel leader Jonas Savimbi's call for a cease fire will be responded to on the government's terms.NEWLN:

BEIRUT, Lebanon -- Iraq denounced as 'hysterical threats' the allies demand that it remove its missiles from a 'no-fly' zone in southern Iraq, the official Iraqi News Agency said. The Ath Thawra newspaper, mouthpiece of the ruling Arab Baath Party, said Iraq had a sovereign right to deploy its forces on all its territories.NEWLN:

LONDON -- Iraq will be responsible for the consequences of miltary action if it ignores the allied deadline to remove its missiles from a 'no-fly' zone in southern Iraq, Defense Secretary Malcolm Rifkind said Friday. It is important that Iraq understands the seriousness of the situation,' Rifkind said.NEWLN:

SARAJEVO, Bosnia-Herzegovina -- Fresh fighting has rocked Sarajevo and other areas of Bosnia-Herzegovina, marring the day on which Orthodox Serbs celebrate Christmas and aggravating conditions amid U.N. warnings as many as 400,000 people could die from cold and hunger. In Geneva, the co-chairmen of the peace talks 'suggested' that Serbian president Slobodan Milosevic attend the second round of talks starting Sunday, a spokesmansaid.NEWLN:

JERSUALEM -- Stormy weather in south Lebanon prevented Red Cross officials Friday from visiting the 415 Palestinians deported by Israel to Lebanon. The Red Cross had arranged with Israel for two staffers, one a doctor, to visit the tent camp to survey conditions among the deportees.NEWLN:

JOHANNESBURG -- Most prisoners would like to forget their cells but South Africa's Nelson Mandela has built a holiday home to resemble the house where he spent his final years of imprisonment. The African National Congress president's retreat in Transkei is almost a carbon copy of the house where he was imprisoned the last two years of his 27- year sentence for opposing apartheid, the Johannesburg Star reported.NEWLN:

A swath of arctic air was to bring cold weather to northern states Friday, while Southern Californians will enjoy a one-day respite from the rainstorms that have battered the area, forecasters predicted. The National Weather Service called for bitter cold from northestern Washington to Michigan and south into Nebraska. A mixture of rain and snow was expected from northern California into Oregon and Washington and Idaho, and in parts of Arizona, New Mexico, Colorado, Texas, Oklahoma and Missouri. Rain was forecast for Arkansas and Mississippi and the East Coast from Florida up to Virginia. 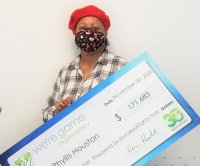