Magic Johnson: 'You could see the fear'

NEW YORK -- During an exhibition game in North Carolina last week, Magic Johnson suffered a cut on his arm and immediately saw 'fear' on the faces of other players.

That, as much as anything else, prompted Johnson's surprising decision Monday to announce his second retirement from the NBA.

In his first television interview since announcing what he calls his final retirement, Johnson discusses the reasons for his decision with Chris Wallace Thursday night on ABC News 'PrimeTime Live' (10-11 p.m. EST).

'That added to it, to my decision of just saying 'it's enough, enough,'' said Johnson, when asked about the incident during the game against Cleveland last Friday night in Chapel Hill, N.C.

'Because, you know, you could see the fear upon people's faces. Yeah, just saying, 'OK, is it all right? Did he bandage it all? Is it all bandaged up? Is it all right? It's not leaking?' You know, that whole thing.'

Johnson originally retired from the Los Angeles Lakers Nov. 7, 1991, revealing he was infected with the virus that causes AIDS. However, he played on the gold-medal winning U.S. Olympic team in Barcelona this past summer, and Sept. 29 he said he would attempt a comeback.

Soon after this latest announcement, Johnson realized the fun part of the game would never be the same for him.

'I just felt all the controversy, people saying different things, not people outside of the NBA, but people within the NBA,' Johnson told Wallace. 'I just felt that it was gonna be like this all year. ... And so, it wasn't worth it because I played basketball for two reasons, the love of the game and to have fun. I have fun doing it. I was seeing that the fun part wasn't gonna be there. And it wasn't worth playing, then, if I wasn't going to have fun and enjoy it.'

Among the players stating their concern about Johnson's return was Karl Malone of the Utah Jazz, the star forward who played with Johnson in Barcelona.

'It is a physical game and you do get kicked and scratched,' Malone said. 'I do have concerns, just like anybody would have. It's not a thing of kicking a man when he's down.'

Johnson said he was upset, but not bitter, by such remarks, adding, 'I don't hold grudges. I don't sit here and think that doggone Karl Malone. I don't do that. That's wasted energy to me. What I do now is I just carry on. OK, it happened, I deal with it and keep going.'

Johnson admitted it was difficult for him to walk away from basketball once again.

'It's tough to walk away from something you love,' he said. 'It will be tougher when I go to the first game. But ... do you subject yourself to not having fun and not having a good time because of what uneducated people think and feel, so every city you gotta answer these same questions over and over again? And I took all of that into account, and I said, 'You know, it's not worth it to do that, because I still have to educate people, and I think I can do it better by not playing and spending a lot more time going around the country or whatever I'm gonna do.''NEWLN: Advance for 7 p.m. est today

Health News // 31 minutes ago
Vaping cannabis can modestly impair driving up to 4 hours later
Dec. 1 (UPI) -- Drivers who vape a combination of THC and CBD or THC alone show signs of impairment up to four hours later, a study published Tuesday by JAMA found. 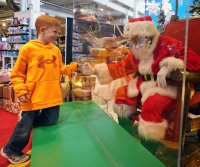 Science News // 1 hour ago
Venus figurines offered a model for surviving climate change, new theory says
Dec. 1 (UPI) -- According to a new theory, Venus figurines, one of the world's earliest examples of art, weren't symbols of beauty or fertility, as has been previously suggested.

Health News // 1 hour ago
Pandemic could be golden time for narcissists, study suggests
The coronavirus pandemic is giving some narcissists a chance to bask in the admiration of others, a new study suggests.