PORTLAND, Ore. -- The Cuban men's Olympic basketball team asked to have their picture taken with the vaunted U.S. team before their game.

The photos won't bring back proud memories for the Cubans. The U.S. team made a thunderous debut Sunday, pounding the Cubans 136-57 in its opening game in the Tournament of the Americas qualifying event.

'If you're in awe of somebody before you play, you already put yourself at a disadvantage,' Charles Barkley said. 'As athletes, we don't want to embarass them because we've all been there before.'

The so-called Dream Team, loaded with the NBA's best, turned the game into a nightmare within minutes for the Cubans. The Americans led 67-27 at the 20-minute half.

'Obviously we had a more talented team,' said Barkley, who led the Americans with 22 points. 'You start to feel bad when you beat a team by so many points. But we know that we are going to play some better teams along the way.'

The game amounted to less than a workout for the United States, which shot 72 percent from the floor and applied fierce defensive pressure on a Cuban squad woefully ill equipped for such a test. Clyde Drexler punctuated the victory with a dunk at the buzzer, creating the record victory margin.

Cuba coach Miguels Calderon Gomez was asked if he thought any team in this Olympic qualifying tournament would be able to beat the Americans.

'I don't think anybody other than another NBA team has a chance,' he said. 'As we say in Cuba, 'You can't cover the sun with your finger. ''

It seemed a good analogy, since none of the Cuban players were able to stay with their American counterparts. Not surprisingly, Cuba had only one player, Leonardo Perez, score in double figures. He had 13.

The only U.S. player who didn't make at least half of his shots was Michael Jordan. He played 21 minutes and made 2 of 6 shots (0 of 3 from 3-point range) for 6 points.

'I didn't shoot the ball particularly well today,' Jordan said. 'But I didn't have to, so I just tried to do other things to help us win.'

Magic Johnson, who had not played since the NBA All-Star in February, had 9 assists. He was the team's low scorer with 4 points, even though he started and played 21 minutes.

No one played more than Barkley's 22 minutes. Christian Laettner had the least amount of time with 10 minutes. Laettner, the only college player on the team, scored 9 points.

The Americans played without starting center Patrick Ewing, who dislocated his thumb Thursday and is to miss a few more days.

The United States plays Canada Monday. The tournament, which runs through July 5, will send four of the 10 teams from North, Central and South America to next month's Barcelona Olympics.

Cuban fans may have figured their team was still in game when the U. S. squad led 19-11, but the Cubans wouldn't get any closer. After that the Americans were able to do almost anything they wanted. They were able to fast break at will, take the ball inside or pull up and hit the jumper.

The Cubans shot 34 percent and often found it difficult just bringing the ball up court. The pressure from Stockton, Scottie Pippen, Johnson and Jordan forced the Cubans into 21 turnovers in the first 28 minutes.

When the score became grossly lopsided in the second half, most teams would have inserted their scrubs -- but the Americans don't have any scrubs.

'Who can you pull back on our team,' Barkley said. 'Look at the team we came in with. We even played a zone to try to slow things down. We have no weak links, we can bring anybody in the game and they will play well.'

It had to be a helpless feeling for the Cubans to be down 71 points and see Stockton, Drexler, Mullin, Malone and Laettner come in fresh off the bench.

At about that time, U.S. Coach Chuck Daly called timeout -- to talk strategy of all things. But most of the players spent the one-minute break watching themselves in a highlight tape on the overhead scoreboard.

'We've got to play the game,' Daly said when asked if he should have held his team back. 'I don't know how you can tell players not to play.'

The Americans quickly returned to business, wrapping up the final eight minutes by increasing their lead almost every trip down the floor.

U.S. News // 30 minutes ago
Boy Scouts file for bankruptcy to pay victims of abuse
Feb. 18 (UPI) -- The Boy Scouts of America have filed for bankruptcy amid mounting lawsuits accusing the organization of sexual abuse.

U.S. News // 38 minutes ago
Hundreds of thousands have sought hidden gold in Rockies, study says
Feb. 18 (UPI) -- In the 10 years since a gold-filled treasure chest purportedly was hidden in the Rocky Mountains, as many as 433,000 "chasers" have searched for it, according to a study. 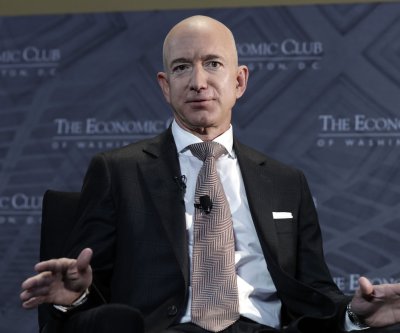