American hostage Edward Tracy, saying he was 'surprised the world is still there,' was freed in Beirut Sunday by his Islamic fundamentalist captors after nearly five years in captivity and flown to Germany for medical tests by American doctors.

Tracy stepped off the U.S. military C141B Starlifter at 3:25 p.m. EDT at the Rein-Main air base at Frankfurt to the applause of several hundred people, most of them American military and civilian government officials.

He made no audible statement but raised both hands in a victory salute, shook hands with several people and was driven to a helicopter for the brief flight to the American hospital at Wiesbaden.

At Wiesbaden, Tracy made the brief walk from the helicopter to the hospital alongside U.S. Ambassador Vernon Walters, raising both arms to acknowledge the screams and whoops from applauding military officials and dependents.

'I'm really happy to see a tree, hear a plane, hear an automobile,' the white-haired, tired-looking Tracy said in an interview with Syrian television in Damascus shortly after his release.

Tracy was freed hours after kidnappers released a French relief worker who was abducted last week. Jerome Leyraud was seized just hours after the release of British journalist John McCarthy, who was freed as a messenger for the kidnappers. McCarthy delivered the message to U.N. Secretary-General Javier Perez de Cuellar in Britain Sunday.

Tracy, 60, a foot-loose writer who has not been in his native Vermont since early 1965, was living in West Beirut when he was abducted Oct. 21, 1986. The pro-Iranian Revolutionary Justice Organization, which took responsibility for kidnapping Tracy, had promised Saturday to release either him or fellow American Joseph Cicippio.

He was released in Beirut and rushed to Damascus under Syrian military escort, the usual policy when hostages are freed.

In Kennebunkport, Maine, President Bush said, 'I know all Americans are gratified today by the release of Edward Tracy.'

'We share in the happiness of Mr. Tracy's family, but we know the anguish of the families who still have relatives in captivity,' Bush told reporters outside his vacation home before going to church.

'We call upon the governments with influence on this issue to build on this positive move and work for the release of all the hostages,' Bush said.

Bush declined to specifically mention Israel, which has come under international pressure to free nearly 400 Arabs -- a move seen as a key demand of the hostage-takers. There remain 10 Western hostages in captivity -- five Americans, two Britons, two Germans and an Italian.

In Damascus, Tracy appeared briefly at the Syrian Foreign Ministry and was turned over to U.S. officials.

Tracy, in the television interview, said in a slurred voice, 'I'm really surprised the world is still here. I thought it had powdered off somewhere.'

'We played cards every day, we had tea every morning, we had video once or twice a week,' Tracy said. 'No newspaper, radio or television for quite a while.'

His mother, Doris Tracy, said from her home in South Burlington, Vt., her son was last home at Christmas 1964 and left in January for Europe. She has not seen him in person since, but after watching him on television she said, 'I thought he was thinner.'

'I wish it was all of them,' she said, referring to the remaining hostages in an interview on ABC's news program 'This Week with David Brinkley.' 'I wish it was Mr. Ciccippio too.'

She also said Bush had called her but as for celebration plans, she said, 'I'll celebrate in my own little quiet way, shall we say.' She said the family 'will probably go out to eat or go for a ride. We'll be very glad.'

Tracy, who was known in Beirut as a book salesman with strong ties to the war-torn country, was taken by gunmen during a rash of anti-Western attacks Oct. 21, 1986.

The Iranian Revolutionary Justice Organization had said it would free either Tracy or fellow hostage Joseph Cicippio.

Cicippio, 60, of Norristown, Pa., was American University of Beirut's deputy comptroller when kidnapped Sept. 12, 1986, in Beirut. His brother, Thomas Cicippio, of Norristown, put 'Freed' under Tracy's name on a big sign in his front yard.

'This still calls for a happy occasion,' he said. 'The main thing is to see a hostage released.'

Leyraud, an administrator with the French organization Doctors of the World, was dumped blindfolded in a suburb of Beirut and found by a Lebanese patrol shortly after midnight Saturday.

He was taken to the office of Interior Minister Sami Al Khatib, where he telephoned his parents in Paris. 'I'm happy. I knew from the start that it was a mistake,' officials quoted Leyraud as saying.

Leyraud was kidnapped hours after McCarthy's release Thursday by the pro-Iranian Islamic Jihad to deliver a sealed message to Perez de Cuellar on Arab demands for the release of all Western hostages in Lebanon.

McCarthy, 34, said he understood the message focused on the issue of 400 Arabs held by Israel. Perez de Cuellar met with McCarthy in Britain Sunday and McCarthy handed him a large envelope.

A caller who told a Western news agency in Beirut he was from the Organization for the Defense of Prisoners' Rights said Leyraud was released despite earlier threats to kill him if any other Western hostages were freed, but that efforts to free the 400 Arabs would continue.

'Tracy was released in Beirut, but was rushed to Damascus by the Syrians as usual,' the Iranian source in Lebanon told United Press International. 'The release definitely occurred in Beirut.'NEWLN: Tracy, a native of Vermont, was a resident of West Beirut when he was abducted on Oct. 21, 1986. A group known as the Revolutionary Justice Organization, which had taken responsibility for kidnapping Tracy, had promised Saturday to release either him or fellow American hostage Joseph Cicippio within 72 hours. more

Gray-haired and bearded Tracy, 60, had been expected to emerge outside Beaurivage Hotel where dozens of camermen and photographers were poised to scramble to take shots of the expected release. But it was not immediately clear where he was released.

Tracy, who was well known among many Beirutis as a book salesman with strong ties to the war-torn country, was taken at gunpoint by a band of gunmen in the middle of ferocious anti-Western attacks Oct. 21, 1986.

The U.S. national, who was held against his will along with 11 other Westerners, was released hours after his kidnappers pledged to set him free in response to present efforts aimed at securing the of some 400 Arabs held in Israel.NEWLN: more

McCarthy, 34, was freed by the pro-Iranian Islamic Jihad group to deliver a message to U.N. Secretary-General Javier Perez de Cuellar on Arab demands in exchange for the release of all Western hostages in Lebanon. Perez de Cuellar met with McCarthy in Britain Sunday and McCarthy handed him a large envelope in front of reporters.NEWLN: more

Earlier Sunday, Leyraud, an administrator with the French organization Doctors of the World, was dumped blindfolded in a suburb of Beirut before being discovered by a Lebanese patrol.

'He is here and he is fine,' said a spokesman for police based at a barracks of the Lebanese Internal Security Force in Muslim West Beirut, adding that Leyraud was released shortly after midnight local time.

Leyraud was taken later to the office of Lebanese Interior Minister Sami Al Khatib, where he telephoned his parents in Paris.

'I'm happy. I knew from the start that it was a mistake,' officials quoted Leyraud as saying.

Earlier, a caller who told a Western news agency in Beirut he was from the 'organization for the defense of prisoners' rights,' said the 26-year-old Frenchman had been released despite earlier threats to kill him if any other Western hostages were freed.

The caller also pledged to keep campaigning for the release of some 400 Arabs imprisoned in Israel for whom the hostage-takers had hoped to exchange their captives.

'We have released the Frenchman Jerome,' the caller said, 'but we pledge to the families of the detainees that we will continue to exert efforts with all means to secure their release.'

The caller said the Frenchman was being freed as a result of 'efforts and guarantees' by various parties designed to release the 400 Arab detainees held by Israel.

McCarthy was freed with a message for Perez outlining Arab demands for freeing all Western hostages. McCarthy said the message focused on some 400 Arabs held by Israel in exchange for the Westerners -- now five Americans, two Britons, two Germans and an Italian. 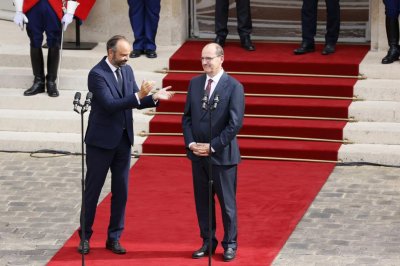