SAN FRANCISCO -- With the Quebec Nordiques certain to select Eric Lindros with the top pick, the first mystery in Saturday's NHL draft revolves around who the San Jose Sharks will take second.

The Sharks have three options, according to director of player personnel Chuck Grillo.

'There are really three ways we can go,' Grillo said. 'All three players would be excellent picks and will have lengthy NHL career. We'll likely pick the one who has the best upside.'

If Grillo knew for sure, he refused to reveal his choice less than 24 hours before the draft.

Niedermayer, 17, ranked second among all scorers in the Western Hockey League last year with 82 points. He's considered a Paul Coffey- type rusher, but still has a few things to learn defensively.

'He has a tremendous amount of offensive ability,' said Sharks General Manager Jack Ferreira, who concentrated on aggressive defensive players in the expansion and dispersal drafts. 'He's got a few drawbacks defensively.'

Lachance intrigues the Sharks not only because of his playing abilities, but also for his public relations value. As one of the best young American-born players, Lachance has a good shot at making the 1992 U.S. Olympic hockey team.

The 18-year-old defenseman starred last season at Boston University where he scored five goals and picked up 19 assists.

'He's a true thoroughbred as a defensive player,' Grillo said. 'We also feel it would be an excellent experience to have a kid play for his country before playing for us.'

Falloon, a 5-10, 192-pounder, scored 64 goals and had 74 assists in just 61 games as he led the Spokane Chiefs to the WHL Memorial Cup last season. And he also could be an Olympian except he would play for his native Canada.

'He's really the most creative passer in the entire draft,' Grillo said. 'The guy can produce points and create scoring opportunities for everyone around him.'

In Friday's supplemental draft -- a selection of players who have turned 21, completed their college eligibility, have never been drafted or have previously played professional hockey -- the Sharks selected All America forwardJeff McLean and Northern Michigan University center Mark Beaufait.

McLean scored 45 points in 42 games last season for North Dakota while Beaufait, who currently is participating in the U.S. Olympic team training camp, had 49 points for the Huskies.

'Jeff McLean is an extremely quick player with ability to control the puck,' said Bob Gernander, Sharks Western region scouting supervisor. 'He goes hard to the net and is overall a very versatile forward.'

U.S. News // 40 minutes ago
U.S. envoy to Haiti Daniel Foote resigns over 'inhumane' refugee treatment
Sept. 23 (UPI) -- Daniel Foote, the U.S. special envoy for Haiti, has resigned from his post over what he called the Biden administration's "inhumane" deportation of Haitian refugees from the southern border in Texas.

Science News // 1 hour ago
Banana plantations offer bats 'fast food,' but alter gut microbiomes for the worse
Sept. 23 (UPI) -- Nectar-eating bats that get most of their nutrition from banana plantations in Costa Rica boast less diverse gut microbiota than their peers living and eating in natural forest habitat.

U.S. News // 1 hour ago
New unemployment filings in U.S. rise to 351,000
Sept. 23 (UPI) -- About 350,000 workers in the United States have filed new unemployment claims, the Labor Department said in its weekly report Thursday, a level more than most analysts expected.

Health News // 1 hour ago
Llama antibodies may fight COVID-19 in humans, researchers say
A nanobody made by llamas, which is also produced by camels, could eventually be produced in a lab and administered by a nasal spray, binding tightly to the COVID-19 virus and neutralizing it, researchers say. 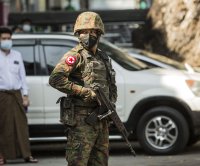 World News // 3 hours ago
Myanmar military kidnapping relatives to lure fugitives, U.N. expert says
Sept. 23 (UPI) -- A U.N. authority to Myanmar says military forces that have taken over the Asian nation are abducting family members -- including young children -- as a tactic to compel fugitives to give themselves up.

U.S. News // 3 hours ago
Great migration of tarantulas is underway in Colorado
During the spiders' annual mating season, thousands of the hairy, brown creatures can be found scurrying across the rocky surface of La Junta, Colo.

U.S. News // 4 hours ago
EPA finalizes rule for first time to place limits on global-warming HFCs
Sept. 23 (UPI) -- The EPA will finalize its first new climate rule on Thursday, which restricts the production and use of hydrofluorocarbons -- a global-warming chemical used commonly in air conditioners and refrigerators.
Advertisement