Among those also waived as the Raiders reduced their roster to 48 players were offensive tackle Bruce Davis, quarterback Vince Evans and cornerback Elvis Patterson.

Los Angeles, which opens the regular season Sunday at the Coliseum against Denver, also traded guard John Gesek to Dallas for an undisclosed draft pick.

Beuerlein, 25, finished last season as Los Angeles' starting quarterback, completing 49.8 percent of his passes for 13 touchdowns and nine interceptions. But with his holdout, Jay Schroeder has become the club's No. 1 signalcaller.

The Raiders, one over the roster limit, were seeking an exemption for Beuerlein, who earned $140,000 last year. Terms of his new contract were not disclosed.

Hunley, 28, played with Denver from 1984-87 and appeared in two Super Bowls with the Broncos. The former University of Arizona star played one season with Phoenix before the Raiders signed him three games into last year. He appeared in 12 games with Los Angeles last season.

Davis, 34, spent the previous three years with Houston before returning to Los Angeles this summer as a free agent. He played his first eight NFL seasons with the Raiders and earned two Super Bowl rings with the club.

When current Los Angeles Coach Art Shell retired in 1983, it was Davis who replaced him at left tackle.

Gesek, a 10th-round draft pick in 1987, was one of only eight Raiders to start all 16 games last season.

Defensive end Anthony Smith, the Raiders' No. 1 draft pick from Arizona, was placed on injured reserve. He tore the medial collateral ligament and sustained a cartilage tear in his right knee during practice last week and will be lost for the season. 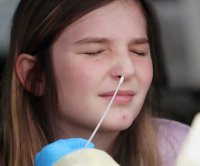 U.S. News // 2 hours ago
Experts advocate better red flag laws as 2022 sees 202 mass shootings
May 16 (UPI) -- There have been 202 mass shootings in the U.S. through the 5 1/2 months of this year, including Saturday's racially motivated attack at a Buffalo, N.Y., supermarket that killed 10. Experts say red-flag laws can help.
Advertisement