'They bring experience in the unique positions that they occupy as role models to the black community or any community,' said Craig Weatherup, president and chief executive officer of Pepsi-Cola Co.

Johnson and Graves purchased the franchise, Pepsi-Cola of Washington, D.C., L.P., for $60 million.

Johnson, a 10-year NBA veteran who led the Lakers to five NBA championships, has been promoting the soft drinks since May 1989, and appears in television commercials for the products. He approached the company over a year ago to inquire about entering into the business deal, making this his first business venture beyond endorsements, he said.

Pepsi now has a basketball star to rival Coca-Cola's Julius 'Dr. J' Erving, who has been a partner in Coke's Philadelphia operation since 1985.

Graves, who publishes the New York-based magazine Black Enterprise, called the deal a step in the right direction for black entrepreneurs.

'I think this sends a signal out that we are making progress. We are going forward. This signifies progress is happening,' he said.

The deal marks the second time in 20 years Pepsi has taken on new franchises.

Pepsi currently owns about half of its bottling operations and holds a non-controlling stake in another 15 to 20 percent.

The company will remain a limited partner to Graves and Johnson by supplying soft drinks to the facility, located in Forestville, Md., said Weatherup.

Graves will serve as the facility's chief executive officer and Johnson as the executive vice president. Together they will be responsible for operations, strategic planning and general management of the facility, which employs 160 workers.

Neither Graves nor Johnson would comment on specific plans for the facility, but Johnson said the two would be active in the community and plan to spend large amounts of time in the area.

'We're going to be here and involved. That's the only way Earl and myself know how to do business, by hands-on,' said Johnson, the NBA's Most Valuable Player the past two seasons.

The facility serves the District of Columbia and a portion of Prince George's County, Md., with a total area of approximately 400 square miles.

Key accounts handled by the facility include the White House, the U.S. Capitol, the vice president's home and the president's fleet of airplanes, called Air Force One.

MLB // 10 hours ago
Yankees make history with triple play vs. Blue Jays
June 18 (UPI) -- The New York Yankees completed their second triple play of the season in a win over the Toronto Blue Jays. The triple play was the first in MLB history completed in the order of position numbers 1-3-6-2-5-6.

MLB // 10 hours ago
Indians smack four homers in win over Orioles
June 18 (UPI) -- The Cleveland Indians pounced all over the Baltimore Orioles pitching staff in their latest victory, with four players homering to cap off a four-game sweep in Cleveland.

NBA // 12 hours ago
Middleton, Antetokounmpo lead Bucks past Nets to force Game 7
June 18 (UPI) -- Giannis Antetokounmpo, Khris Middleton and the Milwaukee Bucks responded to a lopsided loss with a dominant Game 6 victory to force a Game 7 in their Eastern Conference Semifinals series against the Brooklyn Nets. 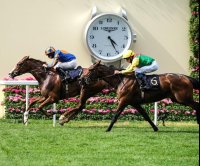 Sports News // 14 hours ago
Love, Palace Pier, Poetic Flair, Subjectivist star in early Royal Ascot action
June 18 (UPI) -- Another spectacular Royal Ascot carries the horse racing world through a week that will help set the agenda for a lot of future events from Europe to California and likely to Australia.