ROME -- Three of the world's greatest tenors -- Luciano Pavarotti, Jose Carreras and Placido Domingo -- sang together for the first time in a World Cup-concluding concert.

The unprecedented concert Saturday, marking Sunday's end of the World Cup, was staged before the backdrop of the third-century Baths of Caracalla and in front of an audience of 6,000, including former U.S. Secretary of State Henry Kissinger, who is to chair the World Cup when it is held in the United States.

An estimated 1 billion people in 30 countries watched the show on television as the three tenors buried old rivalries and sang together under the direction of Indian-born conductor Zubin Mehta.

Under a full moon and with the sound of crickets chirping from under the surrounding pine trees, the concert opened with a rendition of Verdi's 'Sicilian Vespers.'

The three tenors sang first alone and then together, rounding off the concert with a medley of popular songs arranged by Hollywood composer Lalo Schifrin, to rapturous applause.

Not all the critics were enthusiastic.

But other critics emphasized the lighthearted and friendly atmosphere generated by the singers and the technical triumph of broadcasting such a spectacle to a worldwide audience.

Cars were banned from the vicinity of the Baths of Caracalla for the duration of the concert and there was even an unprecedented diversion of airline flights to prevent them from disturbing the music.

The overflight ban was largely successful, although the roar of a jet engine did disturb Carreras's rendition of 'Federico's Lament' from Francesco Cilea's opera 'L'Arlesiana.'

Recordings of the concert on video, record and compact disc are due to go on sale in September and all the profits are to be donated to charity, the organizers said.

Carreras, who recently had to battle back to health after suffering from leukemia, said his money would go for research into the potentially lethal blood disorder.

'This was a real opera world championship to set beside the soccer championships,' said Carlo Fuscagni, director of the state-run television channel that broadcast the show. 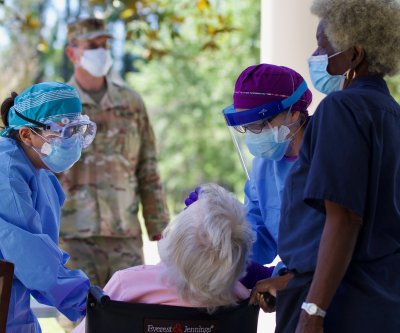 Health News // 1 hour ago
Many COVID-19 patients given useless antibiotics, study shows
Early in the U.S. coronavirus pandemic, many people landing in the hospital may have been given unnecessary antibiotics, a new study suggests.

Health News // 1 hour ago
Common cold could boost COVID-19 immunity, study finds
Aug. 4 (UPI) -- The common cold might help produce immunity against COVID-19, even in people who have not been infected with the new coronavirus, according to a study published Tuesday by the journal Science.

Science News // 2 hours ago
To read, humans 'recycled' a brain region meant for recognizing objects
Aug. 4 (UPI) -- Humans began reading just a few thousand years ago, a relatively recent phenomena -- too recent to be supported by brain regions specifically evolved for the activity.

Odd News // 3 hours ago
Colorado woman finds snake inside toilet bowl
Aug. 4 (UPI) -- A Colorado woman said she was "terrified" when she looked into her toilet and saw something shocking -- a snake coming up from the drain.

Odd News // 3 hours ago
Researchers teaching robots to write a stage play in Czech Republic
Aug. 4 (UPI) -- A team of artificial intelligence researchers are teaming with theater professionals in the Czech Republic to create the world's first play written entirely by "robots."