INDEPENDENCE, Mo. -- A firebomb exploded in a Planned Parenthood clinic Friday, destroying its waiting room, but no one was injured, authorities said.

The clinic in Independence, a suburb of Kansas City, apparently was bombed about 3 a.m. Friday, said Patty Brous, director of development for Planned Parenthood of Greater Kansas City.

The fire was reported by a passerby about 3:15 a.m., and firefighters extinguished the flames in about 30 minutes, detective Al Hainen of the Independence Police Department said.

Brous said the clinic is a contraception clinic only and does not perform abortions. She said the clinic had been attacked four times during the last year, including a Dec. 18 shooting through a clinic window in which no one was hurt.

'If it's an anti-abortion motivation, it's ironic, because all of the clinic's services are designed to prevent unintended pregnancies,' Brous said.

A preliminary investigation found signs of a flammable liquid at the site, Hainen said. He said arson investigators from Independence and the federal Bureau of Alcohol, Tobacco and Firearms were collecting physical evidence at the scene 'to determine the actual accelerant and what type of mechanism was used to ignite it.'

No witnesses came forward immediately and police had no suspects, Hainen said. Investigators will determine later if additional help is needed from the FBI or other law enforcement agencies, he said.

The waiting room of the clinic, located in a shopping center near Interstate 70, was destroyed by fire, Brous said. No one was in the building at the time, she said. The rest of the building sustained smoke and water damage.

The clinic was closed indefinitely, but Brous said Planned Parenthood hoped to have an interim clinic opened somewhere in Independence by next week. She said the group planned to reopen the damaged clinic.

Brous said she had no dollar estimate of damage to the clinic. Planned Parenthood has a total of eight clinics in the Kansas City area.

'We are shocked and very concerned that the pattern over the past 10 years continues, that between the Christmas holidays and the Jan. 22 anniversary of Roe vs. Wade, the most extreme members of our opposition turn to violence,' said David Andrews, executive vice president of the Planned Parenthood Federation of America in New York City.

'Planned Parenthood is well prepared, because we know how unstable and unpredictable our opposition is at this time of year, but we are outraged at their disregard for the lives and safety of Planned Parenthood staff and the people who live in the vicinities of our clinics,' Andrews said.

The last Planned Parenthood clinic bombing was in Kalamazoo, Mich., two years ago, Andrews said. He said about six of the organization's clinics have been bombed over the last 10 years, while threats and incidents of harassment numbered in the thousands.

Odd News // 5 hours ago
Sea lion previously rescued from highway found in California storm drain
May 16 (UPI) -- SeaWorld Rescue in San Diego said a sea lion that made headlines for blocking a freeway in January is undergoing a behavior analysis after being rescued from a storm drain. 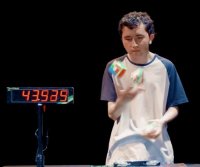 Odd News // 8 hours ago
Lost Arizona dog lived on her own for 15 months
May 16 (UPI) -- An Arizona animal rescue group said a dog who was presumed dead after going missing from her new home was found to have been living on the loose for 15 months. 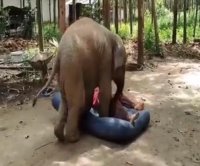 Odd News // 12 hours ago
Baby elephant takes bed from keeper in viral video
May 16 (UPI) -- A baby elephant was filmed stealing an air mattress from its keeper in a video that has gone viral on Twitter.
Advertisement