Police said a contract worker last seen in a pickup truck near the site of the explosion was killed in the blast, said Jan Bernard, assistant chief administrator with the mayor's office.

Civil defense officials said the explosion at 1:30 p.m. was felt by residents as far as 50 miles away.

Exxon spokesman Dave Gardner said the fire had been contained in a area smaller than a football field, but firefighters from Exxon, city and parish departments and a private firefighting firm probably would continue battling the blaze into Christmas morning.

Bernard said about 50 members of the National Guard, state police and local agencies were directed to patrol the area around the plant, where there were reports of looting from stores whose windows had blown out.

'They are mostly cuts and bruises,' said Exxon plant manager Ed Galante. 'One man strained his back and I think there was one who had some glass in his eye.'

Gardner said residents were not endangered by the smoke that came from burning heating oil and lubricants. But several nearby businesses and homes were damaged, mainly broken windows, by the explosion and debris and Exxon planned to pay to repair the structures, he said.

'No citizens were hurt. We were very fortunate,' Bernard said.

A four square-mile area around the refinery was closed to traffic, Galante said, but no evacuations were ordered.

'We suspect we did have some kind of gas release that was then ignited but that is unconfirmed at this time,' Galante said.

The fire was battled by Exxon firefighting crews, with outside help on standby.

Several smaller explosions were heard after the initial blast rocked the city about 1:30 p.m. Area residents as far as 10 miles from the refinery reported an electrical power surge that dimmed lights and knocked out television sets briefly about 30 seconds before the blast was heard.

'Several people are calling 911 and reporting they had damages. Right now we are dealing with getting the fire under control,' said Pam Porter of the East Baton Rouge Sheriff's Office.

The explosion blew open locked doors and shattered windows in the 32-story state capitol that stands about 1 mile south of the Exxon refinery. The governor's mansion is in the same area.

The plate glass fronts of stores on Riverside Mall, a half-mile street that extends to the capitol grounds, were blown out. Gov. Buddy Roemer ordered National Guardsmen on duty to protect the stores against possible looting.

Roemer surveyed the area by helicopter and landed at the plant site. He told reporters there Department of Environmental Quality staff were on the scene and had no evidence of toxic releases from the blast.

State Police Hazardous Materials and Tactical units also were on duty inside and outside the plant.

'I thought a space heater had blown up,' said Shawn O'Brien, who lives in the Spanish Town neighborhood in the shadow of the Capitol. She said the blast blew out a bathroom window.

Exxon plant workers began shutting down the 2,000-acre facility while firefighting crews worked to contain the fires in the storage yard several hundred yards from a loading dock on the Mississippi River.

A tanker that had been tied up at the dock was moved out into the river for safety.

Odd News // 1 minute ago
Ghost town remnants emerge from drought-stricken Utah reservoir
Sept. 20 (UPI) -- Drought conditions in a Utah reservoir led to the revealing of an unusual piece of the state's history -- the remnants of a ghost town. 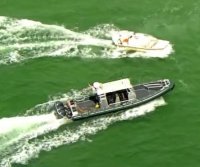