SEATTLE -- A University of Washington student pleaded innocent Wednesday to federal charges he was one of seven people who set a U.S. flag on fire last month to protest a new law banning its desecration.

However, Mark John Haggerty, 23, of Seattle, took advantage of his arraignment in U.S. District Court to read what he called a 'Marxist statement' of protest against the law that took effect Oct. 28.

Saying the U.S. flag 'in reality only represents the rich' and major corporations such as Boeing Co., Haggerty said, 'My only regret is I didn't wear a ski mask' the night of the flag burning protest.

Haggerty was the second defendant to be arraigned on charges of destroying public property and burning a U.S. flag. On Tuesday, Darius Allen Strong, 20, of Seattle, was arrested and pleaded innocent to both charges and was given a trial date of Feb. 5.

Each of the charges is a misdemeanor offense that carries a $1,000 fine and a maximum penalty of one year in jail.

Magistrate John Weinberg ordered Haggerty released from custody pending further court hearings on what is believed to be the first test of the anti-desecration law in the country.

'This is an extremely unusual section that Congress added to the Flag Desecration statute,' McKay said. 'The Supreme Court must accept it if it is the first flag desecration statute case presented to it.'

McKay also noted he waited a month for the results of an investigation by the Postal Service and FBI before filing charges.

'The new Flag Desecration Statute is the law of the land and it is highly appropriate to be charged here,' McKay said.

Congress passed the law in response to a controversial Supreme Court decision in June in which flag burning was found permissible under First Amendment right to free speech.

Attorneys for both Haggerty and Strong indicated they were considering constitutional defenses their clients' actions are protected by the First Amendment guarantee of free speech.

In addition to Haggerty and Strong, charges were filed against Carlos Garza and four defendants identified in court documents simply as John Doe or Jane Doe.

Strong was identified in court affidavits as the demonstrator who poured a flammable liquid from a container labeled 'napalm' onto a flag and set it ablaze.

Although a similar flag burning protest took place in Washington, D.C., three days after the Seattle demonstration, charges were dropped against the people arrested on the steps of the nation's Capitol.

The Seattle flag burning incident took place at midnight Oct. 28 in front of the Post Office on Capitol Hill, drawing hundreds of onlookers. No arrests were made the night of the protest.

During the protest, the organizers burned a U.S. flag they took down from a flagpole on top of the Post Office as well as thousands of tiny paper U.S. flags.

Odd News // 19 hours ago
Large lizard escapes from Ontario zoo
June 21 (UPI) -- An Ontario zoo is asking members of the public to be on the lookout after a large lizard slipped out of the facility through an open door.

Odd News // 20 hours ago
8-foot python captured in driveway of New York home
June 21 (UPI) -- Police responded to a Long Island, N.Y., home at which a more than 8-foot snake was found slithering in the driveway.

Odd News // 22 hours ago
Hard hat lost in Massachusetts washes up on Portuguese island
June 21 (UPI) -- A Massachusetts man whose hard hat fell into the Atlantic Ocean in 2014 received word that his lost hat washed up 2,000 miles away in Portugal. 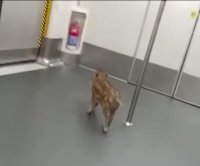 Odd News // 23 hours ago
Wild boar takes a ride on two Hong Kong subway trains
June 21 (UPI) -- A wild boar caused a stir on the Hong Kong subway when it took a ride on a train -- and switched trains at a station to evade its pursuers before being captured.