The incident occurred during mock government elections at the 46th session of Florida Boys State, held June 25 through July 1 at Florida State University.

More than half the 568 participants gave the Nazi-type arm salute June 29 in response to a teenage speaker, the Miami Herald reported Thursday. The unidentified boy spoke in German or in a heavily accented manner intended to sound like German, while supporters marched on stage behind him, the newspaper said.

The Legion's department adjutant, Dyke Shannon of Orlando, said the boy had a 'mannersim of speech and gestures that some boys apparently thought' was reminiscent of Adolf Hitler. The salutes started 'as a way of mocking him,' but the boy and some of the other students got carried away, Shannon said.

The boy ran for several political offices in the mock government, including governor, but lost.

Organizers voted to give him their annual spirit award in recognition of his enthusiasm. The award prompted several students and parents to complain, and the American Legion's top state official apoligized to them Wednesday.

'The American Legion does not in any way, shape or form wish to promote any type of Nazi ideas, and I don't think anything was ever said that would suggest that,' Shannon said.

'The young man, when he spoke, was running for offices and giving an Americanism speech. The content of what he said was as red-white-and-blue as could be,' Shannon said.

He attributed the incidents to 'immaturity and a lack of judgment' on the part of the 16- and 17-year-old participants.

'But it got out of hand, and it should have been stopped. It ended up being very insulting,' Fickel said.

'Being Jewish is secondary to why I was offended,' said Daniel Uhlfelder, 16, a student at Leon High School in Tallahassee. 'The American Legion represents men who fought and men who died in World War II, so I thought it was hyocritical of them to let it go on.'

Shannon said he saw 'a relatively few' students offering the salute and was disturbed by it, but didn't want to cause a scene. With hindsight, Shannon said he wished he and other organizers had called a stop to the incident.

'I think the Legion is to be commended for recognizing a mistake, and I appreciate that Mr. Shannon is moving quickly to take corrective action.'

Odd News // 12 hours ago
Woman breaks one-handed climbing world record in London
May 23 (UPI) -- A woman born with her right arm missing below the elbow broke a Guinness World Record by climbing a vertical distance of 1,229 feet and 9 inches using only one arm on a climbing wall. 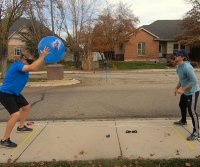 Odd News // 14 hours ago
Raccoon rescued from outdoor drain in Ohio
May 23 (UPI) -- Police in Ohio came to the rescue of a young raccoon found trapped in an outdoor drain.