BRAINERD, Minn. -- Sheriff's deputies moved Friday to lock up the property of Steve Hall, better known as the voice of the country western puppet Shotgun Red on the Nashville Network, who is being sued for nonpayment by a Nashville company.

Creative Marketing Services of Nashville filed suit in Crow Wing County District Court Thursday to recover at least $175,000 from Hall, who lives in the Brainerd area.

Judge Robert Kautz issued temporary restraining and attachment orders that led to the holding of Hall's property, including a motor home.

The judge set another court hearing for July 6.

The company alleges Hall, who also has a band called Southbound 76, failed to pay for novelty products it had provided, such as Shotgun Red T-shirts, bandanas, nightshirts and wristwatches.

The court administrator said the suit alleged Hall may have been planning to leave the country.

Hall, who is named as a defendant along with Daisy hall, Shotgun Red's Gift Shack and Shotgun Red Fan Club, could not be reached for comment. He was not represented in court Thursday, the court administrator said.

Creative Marketing owner Greg Knox and his attorney could not be reached for comment.

Crow Wing County Sheriff Frank Ball did not return repeated telephone calls to his office regarding the property seizure. 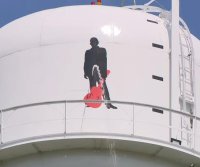