Princess Diana arrived in New York Wednesday for her...

NEW YORK -- Princess Diana arrived in New York Wednesday for her first official visit to the Big Apple, smiling demurely at dignitaries who greeted her, then rushing to off for the first stop on her whirlwind visit.

The princess, traveling for the first time on a major official visit without her husband, Prince Charles, arrived aboard a British Airways Concorde at Kennedy International Airport shortly before 6 p.m., clad in a royal blue wool coat and a string of pearls.

The 27-year-old princess, dressed in an royal blue silk tunic and black skirt, made her first stop at a reception for the Dawson International USA, producers of Scottish cashmere.

The crowd of 150 fashion and retail industry heavyweights - including Bloomingdale's Marvin Traub and designer Oscar de la Renta - let forth a chorus of 'ahs' as the royal visitor entered the room.

After observing the collections displayed on British-made mannequins, Diana received guests. It was to be the first of several receptions to promote British trade, a primary goal of the visit.

Irish-American foes of British rule in Northern Ireland have promised to dog her footsteps with a series of protests, and security for the visit scheduled to last until Friday was intense.

The city began preparing for the visit days before the princess's arrival.

'Obviously her room will be filled with flowers,' promised Bernard Lackner, general manager of the Plaza Athenee. 'But she's not like Elizabeth Taylor, who wants a special closet or a special light for her makeup.'

The high point of Diana's visit is to be a performance of 'Falstaff' by the Welsh National Opera at the Brooklyn Academy of Music, followed by a dinner at the Winter Garden in the World Financial Center. About 850 guests were expected to attend the $1,000-a-ticket gala.

Also scheduled are a lunch and a tour at the world famous toy emporium, F.A.O. Schwarz to promote British toys. Photographers are hoping the princess will be a good sport and walk along the giant piano keyboard featured in the movie 'Big.'

Diana, who has asked to visit a homeless family, is expected to be escorted through the Henry Street Settlement House on the Lower East Side. Before her departure, she also plans to visit child AIDS victims at Harlem Hospital.

The British are hoping that, in addition to boosting trade, Princess Diana will bring a bit of England with her: including good manners for New York's braying press corps, who will make up the lion's share of the 200-odd people covering Diana's visit.

Officials of the British Information Service, handling the logistics of the visit, told a briefing room full of grumbling reporters Wednesday that politeness was at a premium and shouting questions at Diana was just not cricket.

'The Princess of Wales doesn't operate in every way like a president of the United States or like a senior political figure,' said Francis Cornish.

'If people think it would be a good idea to shout questions, I can tell you here and now that you won't get an answer. Frankly, you're more likely to get the back of her head,' Cornish said.

Diana was expected to encounter a number of demonstrations by Irish-Americans, many of whom resent the royal family as a symbol of British rule of Northern Ireland.

Tuesday, the comptroller of suburban Nassau County, Peter King, called Mayor Edward Koch a 'turncoat' for deciding to appear with the princess. King vowed to picket outside the Brooklyn Academy with other anti-British activists. 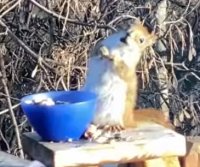