Avery Brooks is brilliant as Paul Robeson on Broadway

NEW YORK -- Whatever the new Broadway season has in store, the performance of Avery Brooks in 'Paul Robeson' will be remembered as one of its most distinguished offerings.

Brooks has opened in Philip Hayes Dean's one character, two-and-a-half hour play about the life of the great Negro actor-singer at the John Golden Theater after a successful off-Broadway run, ably assisted by pianist and sometime singer Ernie Scott.

Brooks' performance is of Tony Award caliber and no one should miss it or the thrill of the spontaneous standing ovation that Brooks gets after each performance.

Better known as the laconic Hawk in television's 'Spencer for Hire,' Brooks reveals himself in 'Paul Robeson' as an accomplished stage actor who brings a special radiance, reality and sense of humor to the re-creation of one of America's great black talents. Brooks is a total actor who puts face, body and hands to ultimate use to convey his dramatic message.

Another surprise is his beautiful voice, not exactly of the deep bass timbre of Robeson's but pleasing nonetheless in such songs as 'Ole Man River,' which Robeson first sang in the London production of 'Showboat' in 1928; 'We Are Climbing Jacob's Ladder,' and 'Nobody Loves You When You're Down and Out,' the latter sung in duet with Scott.

Dean has covered Robeson's life (1898-1976) from prejudice-plagued student days at Rutgers University, where he was an All American football star, followed by wasted efforts to get ahead in an all-white law firm, to his rapid emergence as a world-class actor and singer and his even faster fall from public grace because of his pro-Soviet sentiments.

Brooks rises to his finest moments as an actor in an impassioned scene depicting Robeson's appearance before a Congressional committee that sought to brand the All American who was later to win the Stalin Peace Prize as Un-American. Just as moving are the closing moments of the play in which Robeson quotes from one of his most famous roles, Shakespeare's Othello:

'I have done the State some service, and they know't.'

This is not a perfect play, but an immensely moving one. The first act is the most effective, relying on Robeson's memories of his childhood, his beloved preacher father and his doomed rebel brother to create sympathy for this large hearted man who felt all men were his brothers despite almost daily evidence that this feeling was not reciprocated.

The second act piles on the politics as Robeson uses his concerts more and more as a platform for preaching peace and brotherhood, and could be tedious if it weren't for Brooks' charisma.

Yet this act has wonderful vignettes, such as Robeson's story of the dwarf pianist-daughter of his Berlin booking agent who was swept away in the Holocaust and his undoubtedly idealized memory of how peasants greeted him at the border as a 'People's Artist' on his first visit to Russia. It ends with the audience joining Brooks in singing 'We Are Climbing Jacob's Ladder' with very little urging on his part.

The Golden Theater stage is simply hung with curtains and furnished with a grand piano, that also serves as Robeson's father's coffin, six gilded bentwood chairs, two urns holding flowers, and a pedestal supporting a spotlighted bust of Robeson.

Director Harold Scott has been able to turn this into the many arenas of Robeson's long career by simple suggestive movement on the part of Brooks such as swinging a chair over his shoulder to show how Robeson played Simon carrying Christ's cross in his first stage appearance in Harlem.

Robeson's own crucifixion is the crux of this play, which unfortunately leaves this question unanswered: Was he a dupe of the Communists or a willing collaborator, or as he claimed 'not pro-Communist but anti-Fascist'? Perhaps we will never know, but the man had greatness in him and this play is a tribute long overdue. 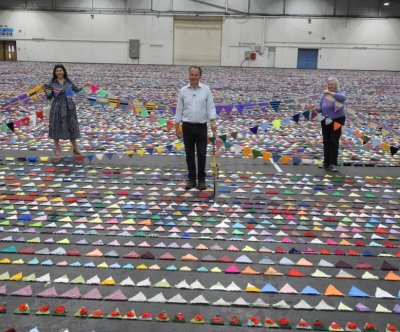