ATLANTA -- Only 10 years ago Michael Dukakis's political career was in shambles. Now the 54-year-old Massachusetts governor with the no-frills, businesslike demeanor is about to become the Democratic nominee for president.

With a good organization and sound financial backing, the three-term governor was able to collect more than the 2,082 delegates needed for nomination at the Democratic National Convention in Atlanta July 18-21.

Moving ever closer toward realization of the American dream, the son of Greek immigrants will face Republican Vice President George Bush in the November election to decide who becomes the next president of the United States.

It has been a long climb back for Dukakis, whose political career appeared to be over in November 1978 when, as a first-term governor, he was rejected by Democratic primary voters in favor of conservative Edward King.

The defeat was particularly bitter because it came on a large anti-Dukakis vote by former supporters alienated by what they perceived as arrogance and self-righteousness in his first term in office.

'It was the most painful experience of my life,' Dukakis said. His wife, Kitty, called it 'a public death.'

Dukakis brooded through his remaining lame-duck governorship and then took a teaching post at Harvard University's John F. Kennedy School of Government -- a period Dukakis calls an involuntary sabbatical from public office.

He used the time to examine what he had done wrong and what changes he could make in both his professional and personal style. His decision: To try politics one more time.

Declaring himself to be 'older and wiser,' Dukakis recaptured the governorship in 1982 and was re-elected overwhelmingly in 1986.

But his is not entirely a rags-to-riches story.

While Dukakis likes to point out he is the son of Greek immigrants, his family was not the stereotypical immigrant family scratching out a meager existence in a big-city slum.

His father, Panos, arrived in Boston in 1912 from Edremit, a city of Greek population in Asia Minor that is now part of Turkey, and in 1924 was the first Greek immigrant to graduate from Harvard Medical School.

His mother, Euterpe, arrived from Larissa, a major city in central Greece, and became the first Greek woman from Haverhill, Mass., to attend college. She became a teacher.

Born Nov. 3, 1933, in the Boston suburb of Brookline, Michael Dukakis's views -- and those of his older brother, Stelian, killed by a hit-and-run driver in 1973 -- were shaped by an ethos of immigrant struggle.

When asked why he wants to be president, Dukakis always begins by telling how his parents said to him, ''Michael, to you much has been given. Much is expected of you.'

'You've got to put something back,' Dukakis told The Washington Times' Insight magazine. 'I think that's what life's all about, working to improve the quality of life for all of our citizens.

'I don't know of anything that's more personally fulfilling or satisfying than that. It comes out of my family, my background, my parents -- I think a special sense of responsibility as a first-generation American.'

Dukakis became interested in politics at an early age, intently listening in the family living room to the 1940 Republican National Convention and charting the delegate counts for the three candidates.

In high school, Dukakis earned straight A's while taking part in the varsity cross-country, basketball and tennis teams. The popular young man also played the trumpet and was elected president of the student council.

He was described in his yearbook as 'Big Chief Brain-in-Face.'

Dukakis earned a political science degree from Pennsylvania's Swarthmore College in 1955 and spent one summer in Latin America, where he learned Spanish.

He served a stint in the Army in South Korea before graduating with honors from Harvard Law School in 1960. His law school classmates included Sen. Paul Sarbanes, D-Md., and Supreme Court Justice Antonin Scalia.

Dukakis had little interest in joining a law firm, however, remaining intensely interested in politics.

His inspiration, he said, came from following the career of Massachusetts' favorite son, John F. Kennedy, who was elected president the year Dukakis finished law school.

In 1962, he won a seat in the Massachusetts House of Representatives. He won some fame by introducing the nation's first no-fault auto insurance law.

In 1970, he won the Democratic nomination for lieutenant governor on a ticket headed by Boston Mayor Kevin White. The Democrats lost, and Dukakis joined a Boston law firm and served as moderator of the public TV show 'The Advocates.'

He ran for governor in 1974 with Thomas O'Neill III, son of the House speaker,as his lieutenant governor. They won with 53.5 percent of the vote.

Dukakis quickly became known for frugality. As governor, he used the leftover stationary of GOP Gov. Francis Sargent and simply crossed out the name of his predecessor.

He routinely rode the trolley to his Statehouse office and was driven around in a Chevrolet rather than a limousine. He bought his suits off the rack at a Boston bargain store and owned just four cars in the past 25 years.

When he took office, Massachusetts had the nation's second worst unemployment rate and faced a record budget deficit.

He angered voters by breaking his 'lead pipe' campaign promise not to raise taxes, imposing a 7.5 percent surtax on the state income tax, and upset liberals by slashing welfare programs.

He eventually balanced the budget and turned a $500 million deficit into a $200 million surplus. But his opposition to a California-style taxpayer revolt initiative called Proposition 2 was the last straw.

In the 1978 Democratic primary, King won 51 percent of the vote to Dukakis's 42 percent.

In 1982, Dukakis beat King in the primary and easily defeated the Republican ticket in the fall. He showed a new-found willingness to play old-fashioned compromise politics and supported Proposition 2 , which had passed.

The difference was so acute that the Statehouse press corps referred to Dukakis's split governorship as 'Duke I' and 'Duke II.'

An economic turnaround dubbed 'The Massachusetts Miracle' began to take off in his second term, though there are arguments over just how much of it was his doing.

During his term in office, some 400,000 new jobs were created. The unemployment rate fell to 3 percent, lowest of any industrial state. The state cut taxes five times in four years and showed one of the lowest ratios of taxes to personal income in the nation. He was re-elected in 1986 in a landslide.

'I think the '78 election loss to Ed King was the most difficult public moment of his life,' longtime friend and adviser Nick Mitropoulos said. 'And I think his reelection in '82 gave him the confidence to come back, for him to think he could take on just about anything.'

Entering the Democratic presidential primaries this year, Dukakis stressed his managerial competence. 'I've got a record; I'm proud of it. We understand you've got to pay our bills. That's the kind of leadership this country needs.'

He was not the favorite among the Democratic candidates. At 5-foot-8, the dark-haired, average-looking governor with a monotone speaking voice did not stand out in the pack. He loves gray pinstriped suits and wingtip shoes. He does not smoke and drinks sparingly. He is indifferent to food.

Supporters describe him as deliberative, disciplined, determined. Others call him dull, lifeless, unemotional, a humorless technocrat.

It does not bother Dukakis. 'I think we've had enough charisma. I think it's about time we had a little competence in the White House.'

Dukakis emerged as a leading contender for the presidential nomination after former Sen. Gary Hart of Colorado dropped out in May 1987.

Nevertheless, Dukakis remained the No. 1 fund-raiser among the Democrats, with more than $2 million in the bank at the start of 1988.

While other candidates targeted specific regions of the country or states to bolster their campaigns, Dukakis steadily pressed his message in every state. Sen. Paul Simon, D-Ill., one of the former presidential candidates, said of Dukakis, 'His greatest virtue turned out to be a simple one: he didn't try to fashion himself to be anyone else; he did what he felt comfortable doing.

'His weakness as a candidate is that he does not convey passion,' Simon said.

In 1982, his wife entered the hospital to overcome a 26-year addiction to diet pills. Dukakis openly wept at a news conference last year in revealing the addiction.

They have three children, John, Andrea and Kara.

World News // 51 minutes ago
Volcanic ash poses number of various, and possibly unseen, dangers
A volcanic eruption is one of the most powerful forces in nature, a seemingly unstoppable phenomenon that can have far-reaching impacts far beyond the area surrounding the volcano itself.

U.S. News // 2 hours ago
House panel votes to approve legislation for slavery reparations
April 15 (UPI) -- A House committee approved legislation late Wednesday to pave the way to pay reparations to ancestors of enslaved Black Americans though the bill has an uphill battle before it can become law. 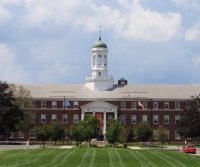 U.S. News // 6 hours ago
China is working to undo global norms in its favor, says U.S. intelligence community
April 14 (UPI) -- U.S. intelligence officials briefed the Senate on challenges the United States faces in protecting the homeland, including the increasing competition from China.

U.S. News // 10 hours ago
Capitol rioter accused of beating officer to be jailed until trial
April 14 (UPI) -- Jeffrey Sabol, a Colorado man accused of beating an officer who was treating injured rioters during the Jan. 6 insurrection at the Capitol, was ordered to remain in jail until his trial.