In that respect, Reagan's journey to Moscow did open a new chapter in U.S.-Soviet relations.

But, much as Gorbachev would have liked Reagan to declare the decades-old standoff over -- repealing the famous 1946 assertion of Winston Churchill that ''an iron curtain has descended on Europe'' -- the president did not do that.

But he did say in his concluding speech in the medieval setting of Guild Hall in London Friday: ''Quite possibly, we are beginning to take down the barriers of the post-war era; quite possibly we are entering a new era in history, a time of lasting change in the Soviet Union. We will have to see.''

Reagan pointed to his policies as the impetus for such gains. His ''forward strategy of freedom, a strategy of public candor about the moral and fundamental differences between statism and democracy, but also a strategy of vigorous diplomatic engagement,'' had worked, the president declared.

But there is no question that Reagan himself has shed some of his 25-year-old anti-communist armor in the twilight of his presidency to probe the possibility of a new East-West detente.

For all his speeches denouncing the Soviet Union, Reagan's dubbing the Kremlin as an ''evil empire'' stuck, and it was a label he had to publicly drop in his peace offensive.

Asked about it during a stroll in Red Square, Reagan said: ''That was another time, another era.''

In his own remarks during the summit, Gorbachev said nothing had pained the Russian people more than that pejorative tag. At the same time, the Soviet general secretary has taken many steps -- some bold, some cautious -- to repudiate the repressive and ruthless heritage of the Stalinist era.

Reagan said in his Guild Hall speech that he is pursuing a policy that rejects ''both the inevitability of war or the permanence of totalitarian rule; a policy based on realism that seeks not just treaties for treaties' sake but the recognition and resolution of fundamental differences with our adversaries.''

''I believe this policy is bearing fruit,'' he said.

The two leaders came together because of a mutual need.

Reagan brought to the presidency an entourage of conservative advisers who believed, as he later revealed himself, that a nuclear war between the superpowers was inevitable.

And that was the general direction of early administration policy, reflected by Reagan's claim in his first year in office that winning a nuclear conflict in Europe was possible.

But somewhere, at some point, he became convinced that ''a nuclear war could never be won and should never be fought.''

Who or what convinced him is not yet certain. But from that point on he changed his tune.

The 57-year-old Gorbachev came to power after a string of aging Bolshevik leaders had died. They had left their mark on Soviet society with economic stagnation and paranoia.

Gorbachev realized that for the Soviets to advance to the modern age, there would have to be monumental change. His ''glasnost'' policy of more openness, more freedom for his people to speak and worship and to be individuals in a state society, is slowly taking hold.

But it has a long way to go and faces continuing attacks from the elite who remain entrenched in power and are fighting his reforms.

The Gorbachev policy of ''perestroika'' and economic reform has yet to see true fruition and it too is being softly peddled so not to upset those who still hold many of the reins in the Soviet Union.

The summit was more of a triumph for Reagan who learned that Russian people smile and are friendly. He did not meet many of the men and women on the street, but he was able to soak up the atmosphere and came away with impressions that they liked him.

At the same time, the president clearly did not want to make decisions that would tie the hands of his successor on the delicate issue of arms control.

He would have had to cut through many complicated problems to achieve an agreement on the reduction of long-range strategic arms, or START, and he was not ready to go that far.

Such a breakthrough would have been formidable but dogged by opposition of many who believe Soviet superiority in conventional arms would have put the United States at a disadvantage if the missile arsenals were cut in half as proposed.

So the president focused boldly on human rights in Moscow, meeting with dissidents and with the literati, preaching the joys of freedom to the students at Moscow University.

For Gorbachev, the summit was more of a disappointment. He even complained about the slow pace of change and of ''missed opportunities.''

But Reagan did exactly what he had planned to do and no more. Gorbachev had hoped that at least the president would help the Soviets economically by promising to break down trade barriers, instituted in the decades past, that keep the United States from economic dealings with Moscow.

''We have to take this slowly,'' said national security adviser Colin Powell, speaking of the superpower relationship. ''This is too important to rush.''

In his meetings with Gorbachev, Reagan has never abandoned his view that the Soviet leader is a friend he can talk with, or as he explained, that he is ''a serious man seeking serious reform.''

Summits can be exhausting, and at times the president did appear to be simply going through the motions. His comment that maybe ''we shouldn't have humored'' American Indians, and his placing blame on the ''bureaucracy'' for the ills in Soviet society caused some consternation.

But it was apparent the president did not want to attack Gorbachev, his host, or the Kremlin hierarchy while he was a guest in the country. He did pretty well, however, in highlighting some of the prices of the Soviet system.

Reagan also saw firsthand the use of force when he and his wife, Nancy, made an impromptu 10-minute visit to a trendy area. The KGB locked arms, encircled them, and refused to let them continue in an uncontrolled situation.

Had he been a member of the press covering the summit, he would have seen it much more. The security agents were relentless and appeared en masse everywhere. Their power was apparent and their tactics often lived up to their Gulag reputation.

Still, Reagan could see that the sun shines in the Soviet Union as well -- he had beautiful weather every day he was there. And he could see the hustle and bustle of a people, the dynamism that is just waiting to be channeled.

He said the Soviet students he met looked like American students; he praised the warmth and hospitality of his hosts. And he saw that the younger generation was ready for change, even eager for it.

In his way, he did everything he could to try to bolster Gorbachev, encourage his reforms and lend him a helping hand before the Soviet leader goes to the momentous Communist Party congress later this month that will decide whether the society will remain rooted in totalitarian stagnation, or lift the Iron Curtain and end the Cold War with the West.

U.S. News // 11 hours ago
Texas man involved in Jan. 6 riot charged with threatening AOC, police officer
Jan. 23 (UPI) -- The Department of Justice has revealed that a Texas man who allegedly participated in the Jan. 6 Capitol insurrection also posted online death threats against Rep. Alexandria Ocasio-Cortez (and a US Capitol officer. 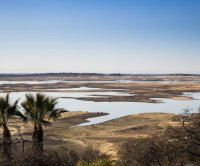 U.S. News // 18 hours ago
'Drought is going to take a good kick in the pants'
Jan. 23 (UPI) -- Forecasters say the drought in California and the southwestern United States is about to take a beating as one storm after another is expected to bring copious amounts of rain to coastal areas.