Raquel shows off her best asset -- her IQ

NEW YORK -- Raquel Welch has spent years proving that people shouldn't confuse her IQ with her other measurements.

The sex symbol who raised a lot of blood pressures in 1966 when she appeared in a fur bikini in the movie 'One Million B.C.' also raised a lot of eyebrows when she took over for Lauren Bacall in the Broadway musical 'Woman of the Year' back in 1982 and won rave reviews.

She has continued to battle for roles that give her a chance to show off her talent. Last October she played a most unglamorous role -- a terminally ill woman -- in NBC's 'Right to Die,' which earned her a Golden Globe nomination.

Her latest role gives her a chance to have the best of both worlds. In 'Scandal in a Small Town,' to air on NBC Sunday, April 10, 9-11 p.m. Eastern time, she plays a small-town cocktail waitress who has something important to say, only no one will listen.

'I play Leda Beth, who is a mother and a floozie,' Welch said in an interview. 'One reason I liked this script is because I have dealt with a teenage daughter myself and I know the problems of raising a young woman who at that age is going to reject you and your ideas and will challenge your authority and seek out her own identity.'

Welch, 47, and her daughter, Tahnee, 26, have weathered all that and Welch is the stereotyped proud Mama when she says Tahnee currently is in Miami making the sequel to the hit movie 'Cocoon.'

In 'Scandal in a Small Town,' Welch said, 'The pivotal conflict takes place because Leda discovers her daughter is being taught anti- Semitism in school, although that's not her word for it because she's a woman who never even finished high school. But she has good instincts and her common sense tells her something doesn't sound right.'

She tries to tell the school board about the anti-Semitic teacher, and instead finds herself a target of controversy because of her shady past.

'I had my children when I was very young (her son, Damon, is 28) and while I didn't pursue a career as a cocktail waitress, I can tell you it ain't easy,' Welch said.

'One of the things that intrigued me about the Leda Beth part was that one of the reasons she was discounted was because she was a cocktail waitress in a rather sexy way. We all know that makes you a big target. If there's any sexual connotation about you, people like to use you as a dartboard. And they discount you on any other level.

'It's almost part of our Constitution -- you can't have intellectual capacity and have sexiness. It's another form of prejudice - a way to discount another human being.'

She summed up her attitude toward her sex symbol status when she once said, 'My body is just there -- like Mount Rushmore.'

She said 'Scandal in a Small Town' was a welcome antidote to 'Right to Die.'

'I couldn't have taken on another heavy thing right now,' she said.

People are still approaching her to say they have someone sick in their family and to thank her for portraying the role of a woman determined to die with dignity.

'I had my own example pretty close to home,' she said. 'My mother-in-law died with such dignity and peace and lack of bitterness, it made me know that it was possible, to make the metamorphosis from one state of being to another without anger or fear. Aside from the sadness of losing her, it was a very beautiful experience to be part of.'

Welch obviously has had her problems in getting people to take her seriously as an actress.

'I went to Los Angeles,' the Chicago-born actress said. 'I really wanted to go to New York and work in the theater, maybe off-Broadway. But I couldn't tackle the Big Apple in those days. I was still a teenager myself and I had two kids.'

She was signed by 20th Century-Fox, made 'One Million B.C.,' and by the time she made 'Fantastic Voyage' the same year she was on her way to stardom as a major sex symbol.

Her current projects include taking time off to decorate her New York apartment, taking a vacation, then working on developing her own company.

She hopes to make a miniseries on the life of blues singer Libby Holman, and has plans for another theatrical movie project and more videos on health and fitness.

'That's grass roots stuff,' she said of her videos, 'dealing with what you see every day in the bathroom mirror.'

Science News // 10 hours ago
Survey: One in three young kids uses social media, use of parental controls spotty
Oct. 18 (UPI) -- One out of three children ages 7 to 9 uses some form of social media, according to the results of a national poll released Monday. In addition, nearly half of those ages 10 to 12 are on social media. 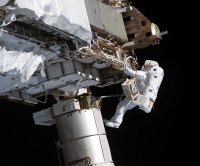