HOUSTON -- A 65-year-old aviation executive who portrayed his 19-seat plane as playing David to Boeing Inc.'s Goliath apparently has grabbed the record for the fastest around-the-world flight from his giant competitor.

If verified by the National Aeronautics Association, which sanctions such records, Paulson will have bettered the record set earlier this year by Friendship One, a Boeing 747-SP.

Paulson, 65, who wore Hawaiian leis and he stepped from the plane and association officials scrambled to check the plane's instrument panel, likened his accomplishment to 'David and Goliath' in beating the Boeing record.

'The winds were cooperative, the airplane worked flawlessly and we had it red-lined all the way,' he said.

The eastbound flight originally was scheduled to leave Long Beach, Claif., but bad weather forced the company to move it to Houston.

In June, Paulson, who bought Gulfstream from defense contractor Grumman Corp. in 1978, set the speed record for a westbound around-the-world flight in the same type of airplane. 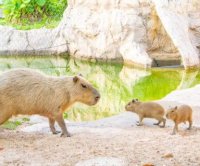