BRADENTON, Fla. -- The wanton destruction of a bald eagle nest on the Gulf Coast might have eliminated successful breeding this year for a pair of the protected birds, a state wildlife official said.

The nest had been built in an isolated pine tree at Braden River Lakes, an 800-home subdivision under construction off state Route 64, and was ripped from the tree sometime over the Christmas weekend, said biologist Brian Millsap with the Florida Game and Freshwater Fish Commission.

Millsap said it was clear the nest's destruction was no accident. Investigators found spike marks in the tree trunk and the tracks of heavy equipment wheels in the ground at the base of the tree.

The adult eagles that built the nest began replacing it in the same tree this week, he said. But they must carry twigs nearly 1 mile and are unlikely to finish the project for weeks. By then, Millsap said, it will be well past the eagles' prime mating season.

Joe Lettler with Flotilla Inc. of St. Petersburg, which owns the subdivision property, said the ecosystem of the former pasture land did not indicate it would be suitable for bald eagles.

Engineer David Haley, who helped design the subdivision, said he didn't see a nest when he inspected the 177-acre parcel earlier this year.

Disturbing a bald eagle nest is punishable by up to two years in jail and a fine of $10,000 under the U.S. Bald Eagle Protection Act, Millsap said. And a reward of at least $500 is offered for information leading to the conviction of anyone who violates the law.

Odd News // 19 hours ago
Lights in Hawaii sky believed to be from 12-year-old rocket booster
Oct. 26 (UPI) -- Experts said bright lights spotted in the sky over Hawaii were likely the remnants of a booster from a rocket launched 12 years ago. 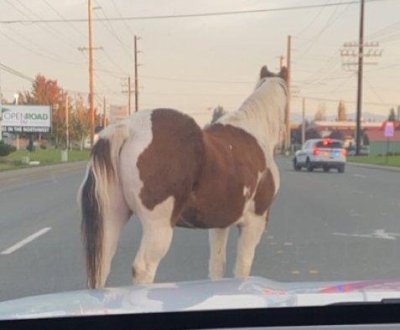