WASHINGTON -- Soviet leader Mikhail Gorbachev arrived Monday for his third summit with President Reagan and his first visit to the United States, issuing a call for peace and progress toward cutting the superpowers' long-range nuclear arsenals.

Gorbachev, in brief remarks after his arrival, gently prodded the Reagan administration, noting, 'we are hoping that we will hear some new words on their side' on the issue of cutting the numbers of large, intercontinental ballistic missiles.

Gorbachev's Ilyushin jetliner touched down at Andrews AFB in suburban Maryland at 4:33 p.m. Exactly 10 minutes later, the Soviet leader and his wife, Raisa, stepped on U.S. soil and were greeted by Secretary of State George Shultz, who warmly shook Gorbachev's hand and said 'welcome to the United States of America.'

'We are delighted to have you here,' Shultz added.

The 56-year-old Gorbachev said that while the key element of the Washington meetings is the signing Tuesday of a treaty eliminating intermediate nuclear weapons, 'at the center of our discussion with the president of the United States will be the pivotal questions of Soviet-American relations -- questions of reducing strategic offensive arms.'

Gorbachev and Reagan have both expressed optimism that this week they can begin to work out a framework for 50 percent cuts in the numbers of long-range nuclear missiles. So far, Reagan's refusal to accept limits on the anti-missile 'Star Wars' project has blocked agreement on strategic weapons.

However, because the elimination of the medium- and short-range missiles will drop a major protection for Europe, many Western observers have also called for the summit to produce progress on reducing the massive edge the Soviets enjoy in conventional forces, such as troops and tanks.

In brief remarks at Andrews AFB, Gorbachev, speaking without notes and through an interpreter, said, 'I wish to assure all Americans that we sincerely want better relations between our governments and peoples.'

'We can, neither of us, shirk the role we are to play in world affairs,' he noted. 'We must act with the utmost responsibility to our peoples and the peoples of the whole world.'

'We are in favor of a constructive dialogue and better relations,' Gorbachev said, adding, 'I would like to wish peace and well-being to all Americans.'

After Gorbachev finished his remarks, he held a brief conversation with Shultz.

'The visit has begun, so let's hope. May god help us,' he said through a translator.

And Gorbachev added: 'You know we are ready too.'

Following the brief arrival ceremony, Gorbachev and Shultz and their wives traveled in a long motorcade to the Soviet Embassy in downtown Washington, where they had tea.

Before arriving in Washington, Gorbachev's jet made a refueling stop near London and Gorbachev met with British Prime Minister Margaret Thatcher, Reagan's close friend and ally.

Thatcher, after holding two hours of meetings with Gorbachev at a Royal Air Force base, gave her blessing to the treaty that will ban U.S. and Soviet intermediate- and shorter-range missiles from Europe and Asia.

The treaty expresses the will of 'all the countries of the world, of the people who want to have peace who are striving for disarmament, for a better world, for a non-nuclear world,' Gorbachev told Thatcher.

Gorbachev's visit to Washington is his first to the United States. He and Reagan have met twice before -- in a 1985 summit in Geneva and last year's summit in Reykjavik, Iceland.

'We are living in historic times and the treaty which Mr. Gorbachev is going to sign is an historic treaty,' Thatcher said after her meeting with the Soviet leader. 'It will be a source of extra security and extra joy for the peoples of the world ... and a promise of more progress to come.'

Security for Gorbachev's visit was extremely tight, with the Secret Service and other U.S. police officials joining the Soviet internal police, the KGB, in rare cooperation to secure Andrews AFB and escort Gorbachev's Soviet Zil limousine to the Soviet embassy a few blocks north of the White House.

Gorbachev, in power less than three years, is a protege of the late Soviet leader Yuri Andropov, who began the latest effort to eliminate inefficiency and waste in the weak Soviet economy. Gorbachev's policies of 'perestroika' -- restructuring the Soviet society -- and 'glasnost' - a new openess to ideas -- have captured the attention of Thatcher, Reagan and others in the West.

But there is also a deep-seated distrust in Washington to Soviet motives and global aims, and this hard realism is expected to frame the summit.

In addition to signing the nuclear and conventional arms questions, also expected to be discussed in the summit are regional issues, such as the Soviet occupation of Afghanistan.

U.S. News // 2 minutes ago
House passes two bills in response to Trump 2017 travel ban
April 21 (UPI) -- The House on Wednesday passed the NO BAN Act and the Access to Counsel Act, which both seek to combat former President Donald Trump's 2017 travel ban. 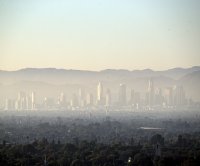