David James Schultz, 36, of Syracuse, N.Y., was arrested without incident at 12:45 CDT p.m. in a Tulsa cafeteria by a police officer and the two agents posing as John and Noreen Gosch, said Special Agent James Ahern in Omaha, Neb.

Schultz told the undercover officers he had information regarding the location of the missing youth in Mexico and would sell the information for $2,500. Ahern said Schultz had 'no such information' about the boy.

Schultz was charged with attempted extortion and wire fraud, Ahern said. Tulsa officials said he was held in the Tulsa jail and a court appearance before a federal magistrate was scheduled for Monday.

Officials also said Schultz was wanted for a parole violation in New York.

A similar extortion attempt was made in 1985 and resulted in the arrest, conviction and jailing of Robert Herman Meier II of Saginaw, Mich., who also claimed he saw Johnny Gosch in Mexico. He obtained $11,000 from the Gosches in a clandestine meeting.

Gosch, then 12, disappeared Sept. 5, 1982, while delivering Sunday newspapers in West Des Moines. Through the efforts of his parents his case has come to represent the problem of missing and abducted children nationwide and lobbying by the Gosches and other parents has led to new laws and child find agencies.

Two years after Gosch's disappearance, on Aug. 12, 1984, another Sunday paperboy, Eugene Martin of Des Moines, vanished without a trace. Authorities have never received a solid lead in either case although the Gosches believe a pedophile ring kidnapped their son and sold him as a sex slave. 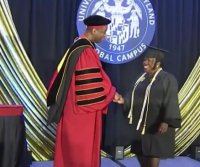