Hendricks, twice president of the South African Methodist Church and a recipient of the World Methodist Peace Prize, and 14 other people were detained by police as the government sought to prevent a planned protest on the prison holding black nationalist leader Nelson Mandela.

Boesak is the president of the World Alliance of Reformed Churches.

'The World Methodist Council expresses the indignation of Methodists the world over at his (Hendricks) arrest and incarceration,' the world body said in a statement issued from its headquarters at Lake Junaluska, N.C. 'We urge his immediate release and restoration to his ministry in Cape Town and ask the support of all governments in his behalf.'

The Council, which represents some 24 million Methodists in 90 countries, said, 'We are equally troubled and concerned at the arrest of Allan Boesak who heads a sister world communion.'

The statement was signed by Bishop William R. Cannon of Atlanta, chairman of the international body and the Rev. Joe Hale, the group's general secretary.

Leaders of the 3.1 million-member Presbyterian Church (USA) and three Lutheran bodies with more than 5 million members in separate statements urged Reagan to seek the release of Boesak, president of the World Alliance of Reformed Christians.

Clerk James Andrews of the Presbyterian Church, a colleague of Boesak's in the World Alliance, said the denomination has sent messages to both Reagan and Botha urging release of the anti-apartheid activist.

'The main concern that I have is that in a terribly tense situation, the removal of moderate leadership makes the possibility of extremists taking control much greater and that is very frightening,' Andrews said in an interview.

'People like Boesak, (Anglican Bishop Desmond) Tutu, and (South African Council of Churches President C.W.) Beyers Naude are men committed to a Christian nonviolent negotiated settlement,' Andrews said. 'If they are removed, where else do the people turn?

Wolpe, in his cable to Botha, said: 'The arrest of Dr. Boesak only emphasizes the brutality of your government's violent repression of nonviolent opposition to the apartheid system by the majority of South Africans.'

The U.S. Lutheran message urged Reagan to 'use your influence to secure the immediate release of Dr. Alan Boesak. His arrest by the South African government can only delay further the evolution of a multiracial society in South Africa with equality for all.'

In Geneva, Switzerland, the executive committee of the Lutheran World Federation, which joins together 99 Lutheran bodies with 55 million people, interrupted its meeting to issue a statement demanding Boesak's immediate release.

The executive committee called on 'all governments to bring greater pressure to bear to halt the inhumane actions under the state of emergency and do everything possible to hasten the process of establishing a multiracial society with equality for all.'

'We ask all governments to press for the immediate release of Dr. Boesak,' the statement said.

Science News // 24 minutes ago
Brain prosthesis that may restore some vision shows promise in monkeys
Dec. 3 (UPI) -- Scientists have for the first time used a high-definition brain prosthesis to stimulate shape perception in monkeys, demonstrating the technology's potential as an aid for the blind.

Health News // 1 hour ago
COVID-19 vaccine efficacy depends on distribution, public confidence, experts say
Dec. 3 (UPI) -- The effectiveness of new vaccines developed to prevent COVID-19 likely depends on how well they are distributed and the degree to which the public is willing to take them, public health experts said. 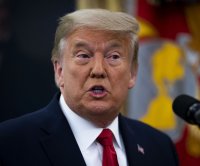 Health News // 2 hours ago
Metabolites from food could affect stroke risk
Levels of some small molecules called metabolites in the body may affect your risk of stroke, a new analysis suggests.