NEWARK, N.J. -- Entertainer Sammy Davis Jr. said Monday his bout with alcohol-related liver disease inspired him to 'give up booze' and commit himself to helping combat liver disease.

In announcing his sponsorship of the Sammy Davis Jr. National Liver Institute at the University of Medicine and Dentistry of New Jersey, the entertainer said, 'A year and nine months ago I almost died. I have always been a heavy boozer and that's how it caught me.

'I haven't had a drink for a year and a half because there's something kind of frightening when a doctor says, 'If your drink, you're going to die,'' Davis said.

He said he feels since he survived his illness, he now has the responsiblity to help other people in a similar situation.

'What turned my head around was my being ill,' Davis said. 'Then I decided I wanted to get involved.'

Davis said he agreed to lend his name to the liver institute to get the message across that people should not abuse alcohol or take their health for granted.

'Giving up booze was not easy,' Davis said. 'I still smoke,' he said. But he added, 'I take one thing at a time. I'm going to give up smoking next.'

The world famous singer, dancer and actor said he plans on doing talk shows, telethons and 'whatever it takes to get this facility mentioned.'

'May be that's one reason why I have survived,' Davis said. 'I said to my wife, I think I was put here to do more than sing 'Bojangles' and 'Candyman.''

Afterward, Davis briefly entertained Gov. Thomas Kean and former Gov. Brendan Byrne with some of the tap dancing steps that were part of his repertoire in his younger days. He told the governors he 'wanted to be remembered as a dancer.'

The Sammy Davis Jr. National Liver Insitute will operate in the University Hospital until a seperate facility can be constructed. The goal of the institute is to be the first medical resource in the world that will be solely devoted to patient care, education and research for liver disorders.

Odd News // 13 minutes ago
Man wins lottery jackpot thanks to rain canceling son's practice
Nov. 24 (UPI) -- A British Columbia man who collected a lottery jackpot of more than $500,000 said he has some unexpected rain and his son's appetite to thank for his good luck.

Odd News // 1 hour ago
12-year-old boy accepted to Georgia Tech, seeks NASA career
Nov. 24 (UPI) -- A 12-year-old Georgia boy who has been accepted to attend Georgia Tech said he plans to study aerospace engineering for a career in space exploration. 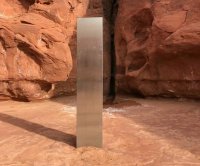