At lease 19 missing people have been linked as...

SAN FRANCISCO -- At lease 19 missing people have been linked as possible victims of bizarre sex-torture slayings in the Sierra Nevada foothills, and 21 more, all young women, also may have been victimized, California Attorney General John Van de Kamp said Monday.

'We can state authoritatively today that 19 missing persons are linked to this case and there may be more,' Van de Kamp said after meeting with law enforcement officials involved in the investigation.

He said investigators were seeking the identities of 21 additional young women whose pictures were found in a torture chamber on a two-acre property occupied by one of two suspected mass killers, Leonard Lake, 39, who committed suicide after his arrest last week.

Lake's alleged accomplice, Charles Ng, has eluded police and is the subject of a massive international manhunt being coordinated by the FBI.

Van de Kamp said 'pictures of 21 women, none yet identified, were found tacked to the wall of the bunker' where investigators believe victims were subjected to sex-torture. The photos will be released in a week or two in hopes that the public might help identify them, the attorney general said.

'It is a very large, bizarre and unusual case,' Van de Kamp said. 'It is one of the worst cases in California history. I can't recall anything quite like it. There are so many leads to follow.'

A personal computer and several floppy discs foufd in the main cabin on the property 125 miles northeast of San Francisco have been 'evaluated' for clues to the killings, but Van de Kamp refused to disclosed what was found.

Meanwhile, a source close to the case said it was 'very clear' that Lake intended that a detailed personal diary of his activities eventually be found, the San Francisco Examiner said. The diary has been in investigators' hands for several days.

'It's clear that he planned everything to the last detail, up to and including his suicide,' the source said.

Lake swallowed a cyanide pill June 2 after he was arrested in a minor shoplifting incident and police began to investigate his activities at the foothill site.

A teamof investigators has collected 20 pounds of burned human bones on the property, and the search was not over.

Among the remains, experts have been able to identify five individuals, including two black people whose sex is undetermined, two females and one child under two years of age.

San Francisco police have definitely linked 10 missing people to Lake and the Calaveras County sheriff's office has linked nine others to the cabin where Lake had built a concrete bunker used for imprisonment and sexual torture.

Calaveras County Sheriff Claude Ballard said Lake's estranged wife, Claralyn Balazs, was under suspicion in the case to the extent that she went to the Lake property and may have removed evidence before investigators arrived there after Lake's arrest in South San Francisco.

San Francisco Police Chief Con Murphy said Balazs was 'a cooperative witness' but that she has not been granted immunity in the case.

Lake, an ex-Marine and self-styled survivalist, is suspected of having lured victims to the cabin, killed them, burned the remains and buried them at various locations on the property.

Ng, 24, also a former Marine, was a longtime companion of Lake and is believed to have participated in the slayings. 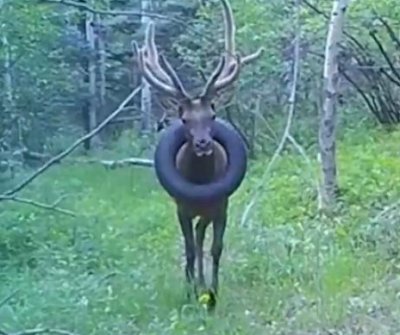 Odd News // 12 hours ago
Italian launches from trampoline, slam dunks from 26 feet away
Aug. 11 (UPI) -- An Italian basketball freestyler tied a Guinness World Record when he launched himself from a trampoline to do a front flip slam dunk from 26 feet, 6.89 inches away.