'It's something that school officials and public health officials should be aware of and should take action to warn children of possible consequences,' said Dr. John E. Smialek, chief medical investigator for New Mexico.

Once used as an anesthetic, the fluid in which the correction ingredient is dissolved seems to excite the nervous system and to cause the heart to beat irregularly, he said.

Witnesses to the deaths said the victims suddenly became very active after inhaling the fluid's fumes, then ran around, collapsed and died.

'Just because a person has used it once and doesn't die from it, it doesn't mean it won't be fatal the next time it's used,' Smialek said.

Smialek and two colleagues reported on four of the deaths in today's Journal of the American Medical Association.

The small quantities of solvent released during normal use should be safe, the researchers said. Teenagers concentrate fumes by saturating a rag with the fluid and inhaling through the rag as the solvent evaporates.

On further investigation, however, it is sometimes unclear whether the company's product was the cause of death, said David Fausch, Gillette's vice president for corporate public relations.

'Whether we can document it or not, we recognize there is a problem with abuse about this product and we're very concerned about it,' Fausch said in a telephone interview.

Recognizing the potential hazards, some manufacturers have strengthened their warning labels. Gillette has put mustard oil in its products to discourage intentional inhalation.

The products are commonly called white-out and are marketed as Liquid Paper, Wite-Out and Snopake.

Odd News // 13 hours ago
Lottery winner's 'random' numbers came from drawing a picture
July 6 (UPI) -- An Australian woman who won a lottery jackpot worth more than $1 million said she used an unusual method to choose her numbers: drawing a picture.

Odd News // 14 hours ago
Estonian town approves letter sculpture to celebrate dialect
July 6 (UPI) -- An Estonian city with a proud pronunciation history will host a sculpture of the favorite local letter, "Ö," thanks to a compromise between residents and the Road Administration.

Odd News // 14 hours ago
Frog stows away from Colombia to Wales in shipment of bananas
July 6 (UPI) -- Animal rescuers in Wales said an exotic frog hitched a ride with a shipment of bananas and was found at a grocery store 5,000 miles from its home in Colombia.

Odd News // 18 hours ago
Kitten rescued from pipe under Phoenix cellphone tower
July 6 (UPI) -- A 5-week-old kitten that became trapped in an underground pipe beneath a cellphone tower in Arizona was rescued in a nearly five-hour rescue operation. 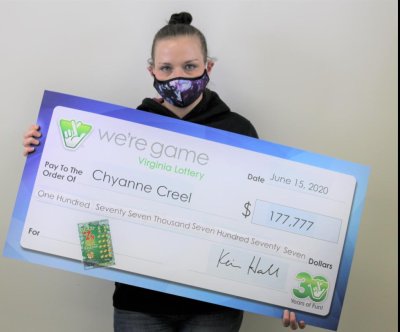