World War II: Bridge at Remagen was 'worth its weight in gold' 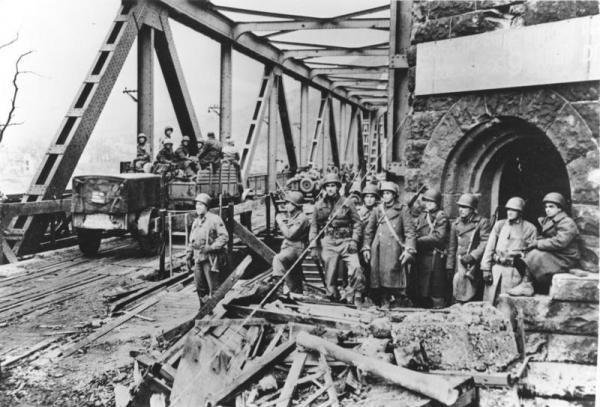 REMAGEN, West Germany -- Blackened basalt towers still stand watch on the banks of the Rhine at Remagen, where 40 years ago advancing American troops seized a bridge leading into the heartland of Hitler's crumbing Third Reich.

U.S. Army Lt. Karl Heinz Timmermann recalled he could hardly believe his eyes the afternoon of March 7, 1945, when his platoon darted out of the Eifel Mountains and descended on the riverside town of Remagen. The Ludendorff Bridge over the Rhine was still intact.

He radioed for instructions and was told to grab it. He did -- in a daring rush that made headlines around the world.

Winston Churchill called it a 'stroke of luck.' Gen. Dwight Eisenhower, the supreme Allied commander, pronounced the bridge 'worth its weight in gold.'

Gen. Omar Bradley's 12th Army Group hailed the Remagen coup by its 1st Army as a miracle. Eisenhower, who had planned to make his main assault across the Rhine with Gen. Sir Bernard Montgomery's British 21st Army Group in the north, changed his mind and reinforced the unexpected bridgehead in the center of the Western Front.

Three weeks later, when Gen. Courtney Hodges' 1st Army finally bolted out of Remagen -- alongside Gen. George Patton's 3rd Army, which had seized two other bridgeheads to the south -- the Americans romped ahead to meet the Russians at the Elbe River in breathless spurts of 30 miles a day against the collapsing Nazi resistance.

'The advance during this period was delayed more by terrain and traffic jams than enemy opposition,' comments Army historian Col. Vincent Esposito in his 'Atlas of American Wars.'

About 150 9th Armored Division veterans, led by former Lt. William McMaster, are returning to Remagen March 7 as guests of Mayor Hans Peter Kuerten. Among them -- Timmermann is dead -- are former Sgts. Alex Drabik and David Keith.

Drabik and Keith, who dashed under fire to seize the bridge, will lay a wreath at its remnants. They now house a 'peace museum' set up by Mayor Kuerten from the $30,000 proceeds of the worldwide sale of its stones as souveniers.

Also returning for what Kuerten hopes will be a symbolic act of peace will be about 80 former German defenders of the bridge. A few of them were also among the Germans captured by the Americans and held near Remagen at the U.S. 'Golden Mile' prisoner of war camp.

The returning veterans will find a quiet, provincial Rhineland city of about 14,000, rebuilt in nondescript postwar style after 70 percent of it was destroyed during the war.

The steel truss bridge between the towers fell into the Rhine 10 days after it was captured -- it was overloaded with American soldiers, 28 of whom died in the collapse -- and was not replaced. Built for military movements during World War I, it never had any particular value for the area's civilian economy.

At the base of one brooding, weathered stone bridge tower, Kuerten's 7-year-old Remagen peace foundation has affixed a plaque. It reads:

'Constructed for war, destroyed in war. The towers shall always remind: Here fought the soldiers of two great nations. Here died the heroes from near and far.'

For the advancing Americans, the Rhine crossing at Remagen was the last tactically significant event of the war in Europe. It proved Hitler had made a grievous strategic blunder in contesting the Ardennes and Alsace instead of defending behind the formidable natural barrier of the Rhine.

It also handed Eisenhower the excuse he needed to turn over the historic initiative to his fellow Americans with whom it was to remain for the next 40 years.

But Remagen, despite the high stakes, was not a major battle. The wholesale dying at Remagen began a couple of months later, when the victorious Americans rounded up as many as 300,000 German war prisoners behind barbed wire and machine guns and left them to their fate without food, water, shelter, medicine or sanitary facilities worthy of mentioning.

Some 1,213 of the POWs, who died of starvation, disease and exposure, are buried in a nearby cemetery, Kuerten said. Numerous others, he said, were simply buried where they dropped in the black loamy mud of the notorious Golden Mile.

When they decided to take the bridge, the GIs did not know there were no enemy combat units at Remagen -- only a 36-man security detachment scraped together from sick, injured or aging Germans. The detail was supposed to blow up the bridge behind their retreating Wehrmacht line troops.

Leading Timmermann's first squad of infantry across the railroad bridge around 4:30 p.m. against sporadic small arms fire, Drabik recalled he was surprised to reach the east bank alive.

The German detail tried to blow up the span, but discovered a freak bullet had cut the electric detonation cable. A second frantic attempt achieved detonation, but the steel span simply rose from its sturdy stone moorings -- and sank back intact.

They had been issued too little of the wrong type explosive.

For the next three days, the 9th Armored Division consolidated its bridgehead on the right bank with little interference. The hundreds of civilians who had taken refuge in the railroad tunnel under the impregnable cliffs abutting the Rhine had demanded the German security detail cease fire -- they feared they might be incinerated in the tunnel if the Americans were provoked to fire on a fuel-laden train also stranded there.

By March 10, the Nazis became aware of the threat and begin desperate efforts to destroy the bridge, but a counterattack on the growing bridgehead was no longer within their means.

Col. Otto Skorzeny's underwater demolition frogmen were snagged in American nets or kept at bay with new canal defense lights that illuminated the river by means of parabolic reflectors. Even the awesome V-2 rockets, used for the first time against a German target, proved futile.

Hitler was furious. He saw betrayal in the loss of the intact railroad bridge. After a Kangaroo court-martial, five luckless German officers were shot for cowardly dereliction of duty. He also sacked Field Marshal Gerd von Rundstedt, his commander in the West.

The heaviest American loss at Remagen came March 17 when the damaged span simply collapsed from overloading, killing 28 GIs and injuring more than twice as many.

A week later, Bradley's armies broke out of their bridgeheads and raced through central Germany toward their rendezvous with destiny.