Women Against Pornography singled out Calvin Klein for sexism in an underwear ad featuring a nearly bare-breasted woman in a 'pose straight out of Penthouse' and also found a diaper commercial objectionable. WAP gave one of its 'Piggie' awards to a Huggies commercial showing babies in a beauty contest presents 'little girls in objectifying cheesecake poses which ignore the prevalence and seriousness of child molestation.'

WAP also accused Bijan cologne, shoemakers Bandolino and HipOppoTamus and Seruchi clothing of using near-pornography to sell their products. The group, however, did like some ads -- those by Toys To Grow On, The American Negro College Fund, Jockey For Her and American Express -- saying they showed women 'as they are and as they wish to be seen.'

Odd News // 1 hour ago
Police respond to loose bison in Ohio township
July 29 (UPI) -- Police in Ohio responded to an unusual situation when an escaped bison was spotted wandering around a community.

Odd News // 21 hours ago
Visitor to Indiana casino scores record jackpot on $1 slot machine bet
July 28 (UPI) -- A visitor to an Indiana casino walked away with a $690,623 jackpot -- the largest in the facility's industry -- after placing a $1 bet at a slot machine.

Odd News // 21 hours ago
Dog missing for two years spotted on TV news segment
July 28 (UPI) -- A Wisconsin man was reunited with his family's missing dog nearly two years later after he spotted the canine in a TV news segment about adoptable pets. 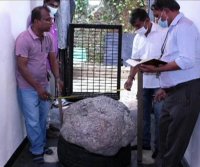 Odd News // 1 day ago
Bull moose removed from Colorado parking garage
July 28 (UPI) -- Wildlife officials in Colorado said a large bull moose was tranquilized and relocated after wandering into the ground floor of a parking garage.