MEMPHIS, Tenn. -- Jerry Lee Lewis' driver told a federal court Tuesday the rock 'n' roll star was so angry when Internal Revenue Service agents seized his property he warned 'they might get their head blowed off.'

Arthur Thompson told the second day of Lewis' income tax evasion trial how IRS agents seized the piano-thumping singer's cars, jewelery and other property and showed up at concerts to confiscate his fees.

Thompson, who was Lewis' driver and valet, was asked how Lewis reacted to the seizures.

'He said if anybody messed around with his property they might get their head blowed off,' Thompson said.

Thompson said Lewis cut short a concert in Chicago after IRS agents seized his fees, saying, 'no pay, no play.'

'Did you ever hear Mr. Lewis say anything about not paying his taxes?' the prosecutor asked.

'I never heard him say anything about hiding anything,' Thompson said.

The prosecution rested its case after Mississippi State Trooper Creekmore B. Wright testified he saw Lewis carry a large cash box packed with $100 bills from his Nesbit, Miss., home on Aug. 24, 1983.

Wright said he was helping secure the home after Lewis' fifth wife, Shawn Michelle Lewis, was found dead of a Methadone overdose.

Wright said he saw Lewis walk out of a bedroom with the cash box and told the singer he could not take anything pertinent to the investigation of his wife's death.

But the trooper said he allowed Lewis to take the cash box after being showed it contained money. Wright estimated the box contained $500,000 to $700,000.

Prosecutors claim Lewis used the cash to buy luxury cars, jewelry and furs for others to hide his assets and avoid paying income taxes.

Witnesses testified Lewis bought $73,500 worth of jewelry in Hawaii, plunked down $12,000 in cash in a lease-purchase arrangement for a Rolls Royce, and bought his girlfriend a $25,500 Cadillac Eldorado.

Defense attorneys blame the problems of the 49-year-old singer, who rocketed to fame in the 1950s with the songs 'Whole Lotta Shakin' and 'Great Balls of Fire,' on Lewis' lack of business sense and a change in managers.

Prosecutor Devon Gosnell said Lewis went on a spree from 1980 to 1983, buying cars for cash in the names of other people, buying jewelry for friends and associates, and giving his girlfriend $80,000 in cash to hold for him.

Mary Kathy 'K.K.' Jones of San Antonio, Texas, told jurors she lived with the piano-thumping rock 'n' roller from 1980 to 1983 and used cash he gave her to buy more than $63,000 worth of jewelry, furs, cars and furniture.

She said she and Lewis picked out the Eldorado and she and a maid picked it up at a Memphis dealership on Dec. 3, 1982, paying for the car with $25,550 in cash. She said Lewis also bought a $15,128 red Mustang for her during the same year.

Jones said she placed in a safety deposit box rented under a bogus name $80,000 in cash she took from a dresser drawer in Lewis' Nesbit, Miss., home in 1981, when the singer was hospitalized for a stomach tear.

'Everybody was wanting me to turn it (the money) over to them,' Jones said of Lewis' family and friends. 'Jerry wanted me to take it to my mother's in Texas.'

A weeping Jones, fashionably dressed and her blond hair cut short, testified she was told by attorney Irvin Salky, one of Lewis' defense attorneys, to place the money in a safety deposit box in another name.

Under cross-examination she said she asked Salky's advice on where to put the money for safekeeping during the singer's illness.

Al Embry, Lewis' tour director, testified Lewis didn't handle his own financial affairs. 'He mainly relies on other people to take care of things for him,' Embry said.

Embry said he had known Lewis for 20 years and the singer never had a personal bank acount.

'Did Jerry Lee Lewis ever tell you he wanted to hide money to keep from paying taxes?' defense attorney Bill Clifton asked Embry

Clifton asked Embry whether Lewis referred to his tax problems. 'Most of the time he would say, 'It's being taken care of,'' Embry said.

Odd News // 19 hours ago
20-year-old photos found in thrift store cookbook returned to family
April 20 (UPI) -- A Kentucky woman who found some baby photos in a cookbook she found at a thrift store used Facebook to find the girl from the photos and return them to her. 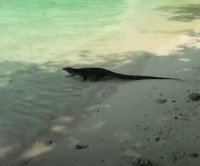