WASHINGTON -- The chairman of President Reagan's re-election campaign said Thursday Reagan lost the debate with Walter Mondale because the presidential briefers smothered him with facts and figures.

'The man was absolutely smothered' by facts and figures, Laxalt said. 'This time we're going to let Ronald Reagan be Ronald Reagan.'

Laxalt, Reagan's closest friend on Capitol Hill, told a news conference Reagan is better fit, both mentally and physically, to be president now than when he first took office.

'Now we can get out of the ivory tower and into the streets -- as we did in 1980,' Laxalt said. 'The president will be even more aggressive than he has been in the past.'

Laxalt said the age issue is the 'red herring' of the 1984 campaign and that 'Ronald Reagan today -- physically, emotionally and in know-how -- is better today than when he took office.'

The Nevada Republican conceded Reagan lost the debate to Mondale, adding that 'even champions have off nights.'

'He was brutalized by a briefing process that didn't make sense,' Laxalt said, adding that Reagan went through six full dress rehearsals for the debate in which he was crammed with facts and figures that would have been 'unfair for a 21-year-old man.'

'The process will be changed this time out and you'll see a brand new Ronald Reagan appear for the next debate,' Laxalt said.

'Yes, we're in a horse race. But we think it's a good thing. We were in sort of a four-corners strategy and now we're certainly going to move into a full-court press.'

Laxalt accepted partial responsibility, for not speaking out against the preparation process Reagan went through for the last debate.

'I wish I had spoken out forcefully,' Laxalt said.

Laxalt scoffed at a suggestion that if Reagan cannot do well in a debate after a detailed preparation process that he probably also could not score points with the Soviets in arms control talks.

'That's a totally different thing,' Laxalt said. 'That does not apply.'

U.S. News // 23 minutes ago
NLRB alleges Google spied on, then fired 2 workers
Dec. 3 (UPI) -- The National Labor Relations Board has filed a complaint alleging Google spied on two of its workers before firing them in violation of U.S. labor law. 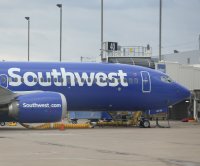