INDIANAPOLIS -- Geraldine Ferraro made a phone call to New York's Catholic archbishop Monday in hopes of quelling a controversy over her stand on abortion, but the archbishop accused her of misrepresenting church teachings.

Ferraro, as well, said she would not change her position, repeating that she will not 'impose my own religion' on any American.

The Democratic vice presidential candidate -- who has been dogged by anti-abortion demonstrators since her nomination in late July - described her call to Archbishop John O'Connor as 'cordial, direct and helpful.'

The archbishop also described their chat as 'entirely amiable in tone' but did not back down from his criticism.'

'I think she has misrepresented the teachings of the Catholic Church,' he told reporters from the steps of St. Andrews Church in Manhattan following a mass.

O'Connor said that his remarks were tied to a letter Ferraro had signed 'saying the teachings of the church on abortion are not monolithic.'

'The teachings of the Catholic Church on abortion are monolithic on abortion,' O'Connor said. 'That to me is a pretty basic disagreement.'

O'Connor said he expected to see Ferraro Friday night at an Italo-American Coalition dinner and that he would await word from her before issuing any further statements on the matter.

'I want to emphasize at once that I bear her no ill will and anything she may have done was without malice completely,' he said.

O'Connor said over the weekend that Ferraro, a Catholic, 'has said some things about abortion relative to Catholic teaching, which are not true.'

Ferraro disputed that Sunday and again Monday, and restated her position that while personally opposed to abortion, she does not believe she can force her moral views on others.

Describing her talk with O'Connor, she said, 'When I asked him about (his) statement, he told me he was referring to a cover letter, signed by me, which was attached to material provided by a group called Catholics for Choice and which was sent to approximately 50 members of Congress in 1982.

'I pointed out to the archbishop that I have never made a public statement describing or misrepresting the teachings of my church.'

The letter, dated Sept. 30 1982, invited Ferraro's fellow Catholic members of the House to a breakfast.

Ferraro said the breakfast 'will show us that the Catholic position on abortion is not monolithic and that there can be a range of personal political responses to the issue.'

Ferraro said Monday she 'explained to the archbishop that I support the right of everyone to speak out on the important issues of the day ....

'I cannot fulfill that duty if I seek to impose my own religion on any American ditizens.'

O'Connor, the spiritual leader of some 2 million Catholics in the New York City area, has criticized politicians, including New York's Democratic Gov. Mario Cuomo, for failing to carry their personal opposition to abortion into the public arena. He specifically complained that Ferraro had suggested some flexibility in the church's absolute opposition to abortion.

Ferraro, who campaigned earlier in the day in Lexington, Ky., went to Indianapolis to raise money -- the ticket price for a private luncheon was reported to be $500 a plate. As she entered the hotel for the lunch, she ignored two dozen anti-abortion demonstrators carrying signs and chanting, 'Life yes, Ferraro no.' 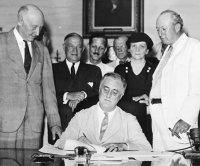 Top News // 1 hour ago
UPI Almanac for Thursday, March 4, 2021
On March 4, 1933, Frances Perkins was sworn in as U.S. labor secretary, becoming the first female member of the Cabinet.