The team, training at West Chester University, must reduce its roster to 70 players by Aug. 14.

Science News // 50 minutes ago
Boeing's Starliner to launch uncrewed test flight to International Space Station
ORLANDO, Fla., May 19 (UPI) -- A ULA Atlas V rocket is scheduled to blast off from Florida at 6:54 p.m. EDT for Operation Flight Test-2 of Boeing's Starliner spacecraft, an uncrewed mission to the International Space Station, after months of delays.

Health News // 50 minutes ago
As temperatures rise. workers in Southwest face health issues
It's getting hotter and hotter outside due to global warming and, as a result, outdoor workers in southwestern states are increasingly vulnerable to heat-related illnesses. 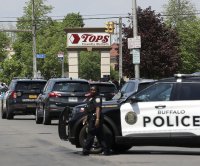