HANOVER, N.H. -- The conservative Dartmouth Review says it will publish a transcript today of a meeting of homosexual students by a reporter who secretly recorded the session.

'We're not out to publish anyone's name or anything like that,' Review Editor Laura Ingraham said Wednesday. The newspaper was trying to find out how the Gay Students Association spends its $475 in funds from Dartmouth, she said.

Despite the threat of university disciplinary action, the newspaper will publish portions of the transcript in today's edition, she said.

The Review, which has been embroiled in several controversies during its four years on campus, is not financed by Dartmouth College. It is run by undergraduate students and survives on contributions from alumni and such conservatives as William F. Buckley.

The taping occurred April 29 at an association meeting for students who wanted to discuss their sexuality and problems related to being gay on campus, said David C. Garling, the group's president.

'She claimed that she was questioning her sexuality and was curious,' Garling said of reporter Teresa Polenz. 'She didn't say that she was a reporter.'

The reporter apparently hid the tape recorder in her purse, he said, because she left the room several times to flip the tape and she also asked 'reporter-like' questions.

Ms. Ingraham said the newspaper checked with its lawyer before deciding to publish and offered advance transcripts to both the association and the university.

The purpose of the plant was to determine what the group does with the money it gets from Dartmouth.

'The big thing is what does this organization do with its money,' Ms. Ingraham said. 'It seems they just have parties and talk about parties. There isn't a heterosexual group that gets funding,' she said.

'They claim their sole reason for the story is to find out about the GSA funds and where they are going,' Garling said. 'They've had a long-standing vendetta against us because we are gay. They consider us the last scapegoat.'

The Review has sparked controversy in the past by questioning equal opportunity programs for minorities and by criticizing a music professor, who is black, for his teaching style and course content.

Dartmouth had no official statement on the latest dispute, but the college's legal counsel suggested the recording might violate the state's privacy statute.

'At the very minimum standard of decency and fairness, where clearly people were going to discuss personal matters, it is inappropriate to be taping those conversations without telling anyone they are being taped,' Cary Clark said. 'It is unusual and at least inappropriate.'

He said any disciplinary action involving students would not by disclosed under university policy.

Ms. Ingraham said the privacy law would not apply because the meeting was advertised on campus as a public event.

But Jay Berkow, an association member, said publishing the transcript would damage GSA efforts on campus 'to discuss openly our feelings about being gay or bisexual. We understood that what was said would not get out of the room.'

Odd News // 40 minutes ago
Porch-trespassing alligator takes ride in Florida deputy's patrol car
June 15 (UPI) -- Authorities in Florida said an alligator found trespassing on a family's porch got a free ride to a nearby lake in the back of a patrol car.

Odd News // 3 hours ago
Deputies wrangle loose kangaroo in Texas neighborhood
June 15 (UPI) -- Authorities in Texas said a kangaroo spotted hopping loose through a neighborhood was safely captured and returned to its owner. 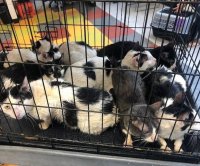 Odd News // 1 day ago
Lost class ring returned to New York man after 63 years
June 14 (UPI) -- A New York woman cleaning out her parents' home after their deaths discovered a class ring and was able to track down the man who lost it 63 years earlier.

Odd News // 1 day ago
White snake on the loose in Manitoba neighborhood
June 14 (UPI) -- Authorities in Manitoba are asking residents to keep an eye out for an estimated 8-foot white snake seen slithering through residential yards.
Advertisement