HONOLULU -- Debi Brett of Great Britain garnered more votes than 20 other finalists in a nationwide call-in beauty contest Monday night to win 'The Most Beautiful Girl in the World' title.

Contestants were selected by casting directors in 21 countries or geographical areas who scouted for the girls. In the finals, they were judged in swim suit and Hawaiian fashion competition and in a 30-second photo session.

Odd News // 8 hours ago
Israeli diver finds 900-year-old sword on seabed
Oct. 18 (UPI) -- The Israel Antiquities Authority said a diver off the country's northern coast found a 900-year-old sword believed to have belonged to a knight during the Crusades. 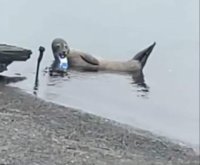 Odd News // 10 hours ago
Scottish police rescue seal with beverage can stuck over its jaw
Oct. 18 (UPI) -- A seal spotted swimming for more than a week with a Red Bull energy drink can stuck to its mouth was rescued by police in Scotland.

Odd News // 10 hours ago
Tiny crack disqualifies pumpkin thought to be largest in U.S.
Oct. 18 (UPI) -- A Wisconsin farmer grew a 2,520-pound pumpkin believed to be the heaviest grown in the country this year, but it was disqualified from competition due to a crack.