President Reagan said Monday America is in 'its strongest...

WASHINGTON -- President Reagan said Monday America is in 'its strongest position in years' to build a good working relationship with the Kremlin and stands ready to reopen a superpowers arms dialogue for the sake of world peace.

Softening his anti-Soviet rhetoric but maintaining his philosophy of peace through strength, Reagan challenged Moscow to resume negotiations 'to work for practical fair solutions on the basis of mutual compromise.'

The president, whose administration has pushed a massive arms buildup in the last three years, said, 'I believe 1984 finds the United States in its strongest position in years to establish a constructive and realistic working relationship with the Soviet Union.'

Britain, Sweden and West Germany welcomed President Reagan's call for a renewed U.S.-Soviet dialogue Monday as a change from the recent mood of chilly confrontation. 'This represents a change in tone as well as more than a change in direction,' British Foreign Secretary Sir Geoffrey Howe said.

But the Soviet news media dismissed Reagan's speech as 'a pseudo-peaceable tirade.'

The Soviets walked out of negotiations aimed at limiting nuclear and conventional arms late last year in response to NATO deployment of U.S. medium-range, nuclear warhead-equipped missiles in Western Europe.

Since talks broke off, the Kremlin has been warning that deteriorating U.S.-Soviet relations have increased prospects for a military clash. Reagan, who last year called the Soviet Union the 'focus of evil in the modern world,' sought to counter public concerns about a possible war and to set the stage for his re-election campaign as a man of peace, in a 24-minute address televised nationwide Monday and aimed at a prime-time audience in Western Europe.

His speech also set the stage for a meeting between Secretary of State George Shultz and Soviet Foreign Minister Andrei Gromyko Wednesday in Stockholm.

'Strident rhetoric from the Kremlin,' Reagan said, has led some people 'to speak of heightened uncertainty and an increased danger of conflict. This is understandable but profoundly mistaken.

'Look beyond the words and one fact stands out. America's deterrence is more credible and it is making the world a safer place - safer because now there is less danger that the Soviet leadership will underestimate our strength or question our resolve,' the 72-year-old president said.

'But to say that our restored deterrence has made the world safer is not to say that it is safe enough. We are witnessing tragic conflicts in many parts of the world. Nuclear arsenals are far too high. And our working relationship with the Soviet Union is not what it must be. These are conditions which must be addressed and improved.'

Reagan, however, proposed no new solutions to the stalemate. He neither offered new concessions nor called for a summit with Soviet President Yuri Andropov to ease tensions.

Labeling 1984 'a year of opportunities for peace,' Reagan said the two superpowers must look beyond their fundamental ideological differences and 'always remember that we do have common interests.'

'Foremost among them is to avoid war and reduce the level of arms,' he said.

He added, 'The fact that neither of us likes the other's system is no reason to refuse to talk. Living in this nuclear age makes it imperative that we talk.'

The Soviet news agency Novosti labeled Reagan's call for better relations with the Soviet Union a 'pseudo-peaceable tirade' aimed at gaining him another term in the White House.

But White House spokesman Larry Speakes said, 'The president has made a serious speech and we would hope to have a serious response. We propose to wait and see what the Soviet government has to say, rather than to listen to some of the statements made in the Soviet press.'

Lawmakers generally reacted favorably to the address, but Democratic presidential aspirant Walter Mondale accused Reagan of 'trying to deal with the politics of a problem instead of the problem itself.

'The problem facing our nation and the world is that President Reagan's policies have contributed to an increasingly dangerous arms race,' he said.

Sen. John Glenn, D-Ohio, another presidential contender, said Reagan 'has apparently decided that some of his harsh and provocative rhetoric of the past was excessive.'

But he said it is 'dangerous to swing wildly between confrontation and conciliation -- between calling the Soviet Union an evil empire and talking about 'constructive cooperation'.

On Capitol Hill, Sen. Charles Percy, R-Ill., chairman of the Senate Foreign Relations Committee, praised Reagan for 'deciding to make this important effort to renew a constructive dialogue with the Soviet Union.' 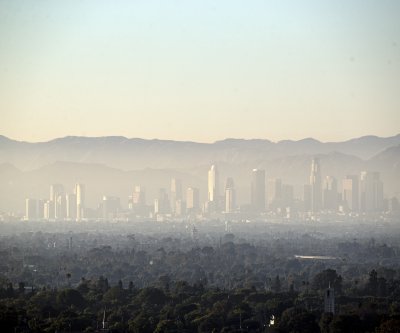 Health News // 7 hours ago
Fading sense of smell may signal higher death risk for older adults
If you're a senior who can't smell onions, smoke, chocolate or natural gas, it's time to see your doctor.