HOUSTON -- A federal judge approved a $2.14 million settlement of lawsuits filed against the Sedco Inc. drilling firm by fishermen, resorts and other Gulf of Mexico businesses damaged in 1979 by the world's worst oil spill, court records showed Friday.

U.S. District Judge Robert O'Conor Thursday signed a final judgment in which Dallas-based Sedco agreed to pay $2.14 million to commercial fishermen, boat owners, property owners, hotels, motels, tourist developers and others to settle their claims stemming from the June 3, 1979, blowout of the Ixtoc I oil well in Mexico's Bay of Campeche.

Ixtoc spewed an estimated 3.1 million barrels of oil into the Gulf of Mexico for more than nine months before it was capped. It blackened Texas and Mexican beaches, smothered fertile fishing grounds and caused other environmental damage.

On March 2 the firm, founded by former Texas Gov. William P. Clements, agreed to pay the U.S. Justice Department $2 million in return for the government's dropping claims seeking an estimated $12.5 million for cleanup costs and unspecified damages to natural resources.

An attorney said the $4.14 million total should end claims against Sedco.

Sedco owned the rig that was drilling Ixtoc I. The rig was leased to Permargo, a Mexican drilling firm, which had an exploration contract with Pemex, the Mexican national oil company.

Sedco previously sued Permargo and Pemex for alleged failure to indemnify Sedco from claims resulting from the blowout.

Although O'Conor set a July 9 deadline for filing claims to the settlement, the judge tentatively divided the funds among three groups of plaintiffs, records showed.

Another group representing developers, hotel, motels, and businesses along South Padre Island or near Laguna Madre in Cameron and Willacy counties tentatively were to receive $600,000 in damages and $200,000 in attorneys fees.

The rest of the settlement, about $40,000, was to be divided among a third plaintiffs' group generally consisting of condominium and home owners along South Padre Island.

Lawyers originally estimated damages would run into the hundreds of millions of dollars, but they agreed to a much lower settlement after experts agreed damages from the spill were not permanent, Mithoff said.

Damage suits filed against Sedco by the state of Texas were still pending.

NBA // 11 hours ago
Toronto Raptors' Pascal Siakam has shoulder surgery, out 5 months
June 11 (UPI) -- Toronto Raptors forward Pascal Siakam likely will miss the start of next season after he underwent surgery to repair a torn labrum in his left shoulder.

Sports News // 22 hours ago
Brisbane endorsed as host for 2032 Summer Olympics
June 11 (UPI) -- Brisbane, Australia, is set to host the 2032 Summer Games due to an endorsement from the International Olympic Committee (IOC) Executive Board, Olympics officials announced Friday. 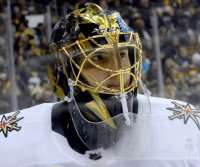